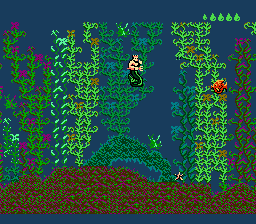 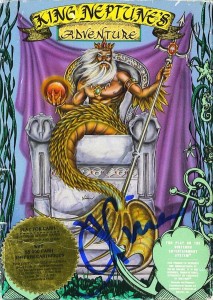 I’m gonna label this picture with a big, fat “Ugh” and leave it at that.

I’d say King Neptune deserves better than this, but in all reality, who is King Neptune and why does he have his own adventure? Neptune was a Roman god, not a king. Anyways, whoever he is and whatever authority he lays claim to, you should forgo his quest entirely, for the good of your soul. Attempting to play through this game can cause severe sensory overload and overwhelming frustration, sometimes together.
Goal: to collect Neptune’s eight treasures from different parts of the sea, in a relatively non-linear, Metroid-like manner. You have two weapons at your disposal, a lightning bolt and a bubble bomb. The lightning bolt is worthless against anything other than smaller enemies, and you have a limited amount of bubble bombs. The latter wouldn’t be so bad if bubble bombs weren’t crucial to your advancement in the game. They’re needed for boss fights, to blow through certain sections, and while you can get more by destroying enemies, they’re too few and far between. Enemies don’t regenerate unless you’re in a certain area called the Open Ocean. This latter area, along with the Sunken Ship, are unequivocal game ruiners. Enemies literally emerge from nowhere onto King Neptune, causing him damage. In the Open Ocean, the green and red background clash with the green and red enemies who vomit green and red projectiles. I didn’t know how I was getting hit half the time, and I wanted to curse this supposedly mighty King Neptune who was getting shredded to bits by the weakest of his creatures (starfish, really?). The Sunken Ship is a cluster of a mess of an area. You’re supposed to bounce bubble bombs off of walls to blow up certain enemies, but the bubble bombs do what they will and do not follow your leading. God only knows what awaits you after you get past these two areas. I’m not going back out in that water and I suggest you don’t either.
F
The following two tabs change content below.