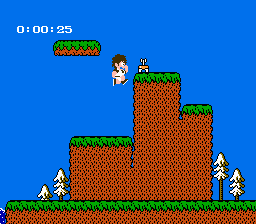 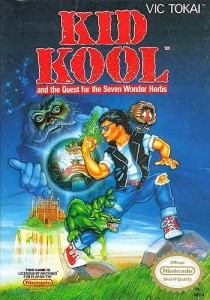 Warning: the game is not nearly as American and stupid looking as it may appear. Nor does Kid Kool resemble Kid Chameleon in any way.

He may look like he’s walking on sunshine, but he’s actually knee deep in Bantha poodoo.

I don’t care how kool this kid is or how wonderful his seven herbs may be. His game stinks like yesterday’s patchouli. This comes as a bit of a disappointment, frankly. I would much rather Kid Kool be fun, with its quirky Japanese stereotypes and Mario-esque gameplay, than Kid Klown, a damnable-looking, but surprisingly enjoyable game. But I don’t make the rules or the games, so I’m stuck with Kid Kool‘s offensive, sluggish controls and boring level structure.
Let’s start with the controls: when Kid Kool runs, he controls like Mario, which, as we all know, is a wonderful thing. Unfortunately, he can not just barrage his way through a level, thus some amount of walking is in order. When Kid Kool walks and tries to bounce on enemies heads without dying, he controls like Mario would in real life – like an overweight plumber who needs to take an extra couple o’ breaths to keep from fainting. He’s slow to turn and easy to hit, which is a wonderful combination for a one-hit death. Should you have Kid Kool’s weapon, a weird strawberry-shaped creature that doles out delicious damage to every enemy, the game is a lot easier because you don’t have to rely on Kid Kool’s atrocious stomping abilities. This weapon only appears at the beginning of each level, though, so should you lose it, it’s gone until the next stage. Kid Kool’s second offense would be the poorly designed levels, which perhaps, wouldn’t feel as poorly designed were it not for the controls. The game is your typical hop-n-bop platformer, move along, nothing to see here. Nothing to collect (the exception being the groovy herbs), nothing to do, except kill enemies and be on your merry way. Sometimes this simplicity is enough. With Kid Kool‘s propensity for frustration, deaths, and boredom, a little ingenuity in the level design would have gone a long way. Guess those wonder herbs will just have to rescue themselves.
D+
The following two tabs change content below.