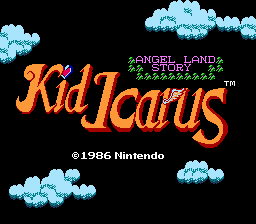 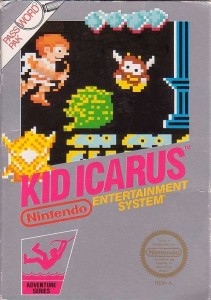 Pit’s got a little bit of a creeper smile going on. 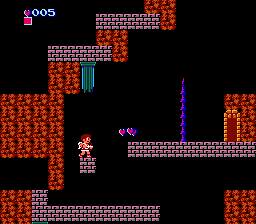 Pit stacks his hearts like we stack our bills.

Kid Icarus, like the original Zelda and Metroid before it, required too much from me as a young kid. This might sound crazy to those of you that grew up with those games, but I didn’t want to dedicate the time and patience required in order to beat them. As a wee lad, I preferred the simple pleasures of Super Mario Bros, Sonic the Hedgehog, and other games of that ilk because you could pick up the controller, play for fifteen minutes, and move on. Looking back, I enjoyed the dungeons in Zelda and the moody atmosphere of Metroid, but the non-linear gameplay in each of those games frustrated my mushy seven-year-old brain. While Kid Icarus is a fairly straightforward platformer (save for the labyrinth levels), your platforming skills had to be the equivalent of the gods for you to succeed. Love it or hate it, Kid Icarus is tough, in the chew-your-nails-raw sense. Perhaps, as a child, I had a short attention span or perhaps my gaming palate just needed to be refined. Either way, both Zelda and Metroid have grown on me since then, no thanks to my enjoying later games in the series. Until today, however, I had not fully explored Kid Icarus. I’m glad I did. Kid Icarus may be too old-school and difficult for some of today’s gamers, but I for one couldn’t deny its effervescent charm. Take that, younger self.
In 1986, Kid Icarus was truly a smorgasbord of new and unique ideas. World 1 and World 3 – the Underworld and Sky World, respectively – see you progressing vertically instead of horizontally, like in Super Mario Bros. A couple years before Zelda II was an apple in Miyamoto’s eye, Pit could “level up” by killing enemies and acquiring points. The more points you got, the more your life bar extended. For some of the later bosses, leveling up is an absolute must. Even before the original Zelda, Kid Icarus had merchants and selectable items and weaponry. Many of these items – like the hammers – are slightly more optional than the items used in Zelda, but they’re still worth collecting to make Pit’s life easier in the game. As if that weren’t enough, the game had a password system that generated every time you died a la Metroid, which released around the same time. We think nothing of these innovations today, but twenty-six years ago, these were groundbreaking. They arguably established Nintendo as one of the most forward-thinking developers of its time (a title I wish they’d strive to reclaim, but I digress…).
Innovations are nothing without fun gameplay, and Kid Icarus succeeds in this area, as well. The game is structured like a simple platformer, but the levels are well-developed and challenging. Pit takes some time to control, as his wings make him a tad floaty. The more you control him, the more it will seem like second nature. Before long, you’ll be jumping over and around enemies while shooting others, hopping from levitating platform to levitating platform, all with 8-bit style and finesse. Much has been made about the game’s difficulty. I liken the challenge to a more difficult Mega Man game or even Ninja Gaiden. Those games are frustrating, sure, but the rewards far exceed the amount of hair you pull out during gameplay. Enemies also have endearing designs: the goofy Grim Reaper (with his own theme song!) and the Eggplant Wizards, who will turn you into an eggplant with feet, are my personal favorites (what was with Nintendo and eggplants around this time?).
I think it’s safe to say that I really enjoy Kid Icarus. I understand the complaints my younger self had with the game, but if I would have just given it the time and patience it deserved, I know I would have enjoyed it. I’m thankful that now, in my mid-twenties, I can appreciate the depths Nintendo tried to inject into the action platformer. Even during the initial success of Super Mario Bros., Nintendo wasn’t content to rest on their laurels and churn out wave after wave of side-scrolling Mario games. Kid Icarus took risks. God bless it for that.
A
The following two tabs change content below.