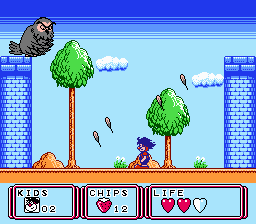 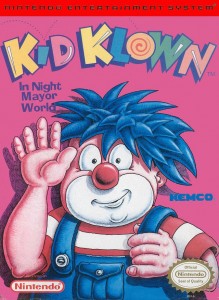 You’d be forgiven for thinking this was the alternate cover for “Shakes the Clown.”

I was worried that playing this game would give me nightmares (not “night mayors” – der hur), as I’m absolutely terrified of/hate clowns*. Thankfully, Kid Klown is as kid-friendly as they come, even in the klown department. It’s also surprisingly fun, in spite of the silly lead character (his first name is Kid, he’s a clown, and he has to rescue his family – he also talks to himself and wets his bed) and the relatively easy difficulty. It’s completely doable to beat this game’s six stages within an hour. The older I get, the less free time I have, the more I like these short, entertaining games. Kid Klown is your typical, late-gen platformer: kill enemies, jump from platform to platform, move to the next level. Your one and only weapon are your limitless supply of balloons, but balloons aren’t just weapons. They can also be used to jump to higher places or to float over gaps. Collect the strawberries in each level for a chance to go to the bonus stage and refill your life, get extra lives, or add on to your health meter. Strawberries are delicious and very healthy for you, but collecting them is not why one plays Kid Klown. Nor does one play the game because one likes platformers or clowns or even night mayors. One plays Kid Klown because it’s a good game, even though it has absolutely no right to be.
B
*For the record, the scariest things in the game are a snowman mid-boss, with its razor-sharp teeth and blood-red eyes; and the final boss, Night Mayor, who actually looks demon-possessed in his final form.
The following two tabs change content below.