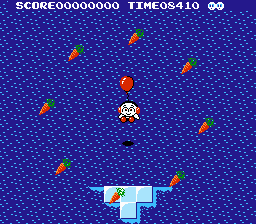 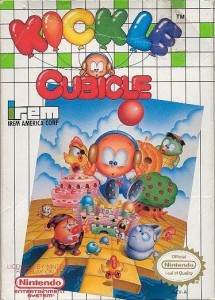 Irem couldn’t have chosen a more disturbing cover for a really fun game.

If you succeed, you’ll be decorated with a circle of carrots.

If it wasn’t for my beloved Lolo series, Kickle Cubicle would have captured my heart all to itself – at least the part that yearns for delicious puzzle games. Here’s the premise: Kickle has to rescue the four kingdoms, which have been covered in ice, no thanks to the evil Wizard King (wizards were a lot more ambitious during Kickle’s time). Each kingdom has about fifteen-to-twenty stages each, and in order to advance, you must collect three Dream Bags on each stage. Use the enemies – particularly the regenerating blue puffballs – to your advantage. Each stage is essentially an ice island, with water surrounding you. By freezing the puffballs with your ice breath, you can turn them into ice cubes and push them into the water to make pathways to collect each Dream Bag. You can also erect blue blockades by pressing ‘B,’ which can protect you from the more aggressive enemies, like the bombs. Like Lolo, you use the enemies and environments to progress to other stages. Were that all gaming as pure and ‘organic’ as these puzzle-adventure hybrids.
In many ways, Kickle Cubicle is as ludicrous as the name from which it is derived. Once you collect all your Dream Bags on a particular stage, the entire ice island is decimated. Kickle barely escapes, thanks to his trusty red balloon. While he floats in the air, rejoicing in his victory, he’s surrounded by a circle of dancing vegetables, fruit or toys, depending on the theme of that particular kingdom. Just watching this game in action makes you feel like you’ve entered some sort of Japanese group think, and yet, like the best Japanese games, the gameplay comes so naturally. Perhaps I can say this because I’ve delved deep into Lolo, but I never had to question what the game wanted me to do. Kickle Cubicle might not have the brain-benders of the Lolo series, but it’s great for kids and adults who don’t want to think so hard (admittedly, I find myself in this group more often than I’d like). It truly is a joy to play.
A-
The following two tabs change content below.