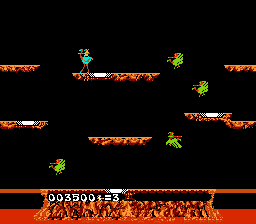 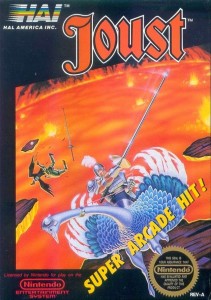 The world may be ending, but decency and order still need to be maintained. 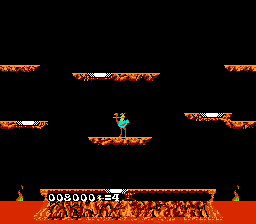 Some developers just want to watch the world burn.

Joust, my friends. Joust. Because when all else fails and life’s getting you down, sometimes it’s best to just mount an ostrich, faithful lance in tow, and get to slaughtering dozens of evil knights. This passion for medieval blood was strong in me when I was a child. I really enjoyed seeing how many levels of Joust I could conquer. Each level, or “wave” as us old-timers used to call ’em, consisted of a few platforms, enemy portals, and a couple lava pools where disembodied floating hands could bring unsuspecting stragglers to their doom – evil knights included. The whole point of the game was to kill the other knights and collect the eggs that dropped from their ostriches (for harvesting the young, of course). As the waves progressed, the platforms would dissipate into the black background ether and the enemies would get harder and faster (but not necessarily better or stronger). It’s a simple old-school game that changed just enough each level for my eight-year-old self to be interested. But the age of eight also brought overwhelming amounts of pleasure from Ace of Base’s “The Sign” album and watching “Aladdin” every day during the summer of ’93. Joust, while certainly not a bad game, does not change enough from level to level to remain interesting, nor is the gameplay striking enough for the lack of diversity not to be an issue. Even as the game gets slightly harder with increasing enemies, the only real challenge comes from the game’s intentionally unwieldy controls and that’s never a good thing. Still, I can’t deny that I couldn’t stop playing the sucker today. Despite my critical issues, perhaps there’s still some of that kid in me that just likes to skewer dudes who have chosen ostrich riding as a point of pride.