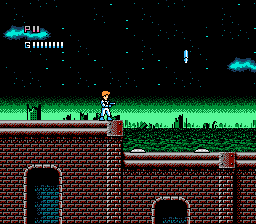 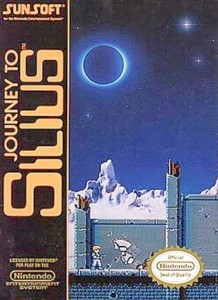 Unfortunately, the presence of the main character and the robot enemy ruin this otherwise brilliant minimalist cover.

Rescuing princesses?! Hah! Jay, the lead protagonist in Journey To Silius, has no time for such trifles. His father has just been murdered by space terrorists from the ruins of the planet Silius. Revenge is the only thing that will give him a warm sense of satisfaction. There are six stops, or “levels,” on his journey, each one more cold and heartless than the next. Besides the overall decay and feeling of dread he feels, Silius’ inhabitants are killing machines, who seem to have a thing for putting bullets into human flesh. Fortunately, Jay’s packin’. Unfortunately, he only has a handgun and a shotgun. The handgun has unlimited bullets, thank God, but if he decides to use the shotgun, his ammo depletes quickly. He better hope some careless robot enemy leaves a stash of bullets after they die. As Jay progresses and kills some larger robots, these robots will leave extra weapons on the ground, like machine guns, homing missiles, laser rifles, and grenade launchers. Jay realizes these guns are special, so he holds onto them until he faces the overlord, or “boss” of each level. Without his extra weaponry, these overlord battles are mighty tough. In fact, one might say his entire journey is incredibly tough. The residents of Silius spew bullets like they’re rich dictators throwing out candy to their starving children. It will take a lot of guts – both literally and figuratively – for Jay to complete his journey. But if you’ve got the stomach for the occasional disappointment and a heart that will not admit defeat, it’s a journey well worth taking.
B+
The following two tabs change content below.