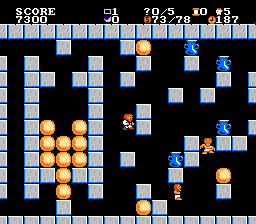 The Wall looks like it’s going to crush the horn players. Out of the way, chaps!

Joshua has a bit more beard than the heathens.

Wisdom Tree’s re-interpretation of biblical stories is either pseudo-artistic gold or downright sacrilegious, depending on one’s point-of-view. I personally think if a company’s going to publish illegal Christian games, they might as well give them gameplay that suits their storyline. In Exodus, which was ostensibly about Moses’ journey to the Promised Land, you played as Moses and you collected manna and question marks to progress to the next level. How does a collect-a-thon lead anyone to the Promised Land? I didn’t care much for Exodus, but Joshua, which is in every way a sequel, fares a bit better. I attribute this to the lack of an 8-bit version of “Father Abraham” playing every few seconds, but also because I knew exactly what to expect from the moment I saw the first level. Joshua is, for all intents and purposes, the exact same game as Exodus, except instead of collecting manna and question marks, you collect screaming faces and random material goods, like pots, that represent money. I should say, you choose to collect these goods, as they have no bearing on whether you advance or not. Once you’ve found the five hidden screaming faces, an Atari-esque portal opens up and you make your way to the next round. Each round contains Canaanites, Amorites, and Hittites to avoid (if they touch you, you die) or to blast apart with your gift of song (your weapon is musical notes blasted from your mouth). The biblical questions are still here as well, except you’ll need to mine the book of Joshua for answers instead of the book of Exodus. It’s classic Wisdom Tree: mining the Bible for inspiration and sales from wary Christian mothers who wouldn’t want their child to play some violent (but legal) game, like Contra.

If I were to make a liberal David Lynchian interpretation of how Joshua actually measures up to the book of Joshua, it would go a little something like this. The screaming faces you have to collect in order to advance represents both Israelite frustration at being stuck in the wilderness, and God’s anger towards the Israelites for their lack of obedience. The goods represents the spoils of war that you can choose to take or not. Joshua sings songs of deliverance as he sneaks around these heathen cities. If discovered by the enemy, depending on the strength of the pagan, said song could either bring the pagan to his knees or enrage him further. This is probably all bullcrap, but it gives my writing degree something to do.