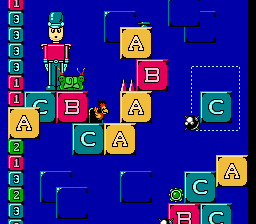 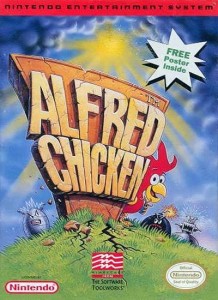 Somebody’s setting him up the bomb… wait? Free poster? I bet that’s worth some change now. 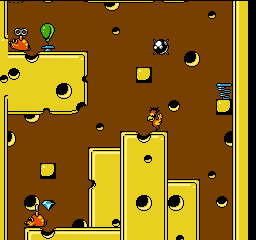 Alfred Chicken was quietly released in early 1994 by Mindscape Entertainment, a few months before the NES’ demise, and boy, is it ever on the low end of the pecking order. It’s a weird, quirky, childish platformer that would be below average, if it wasn’t so determined to be a standout freak among the NES’ platforming library. The game is fairly short spanning only five levels, but if you’re into straight-up mind-trippery, you should probably give it a shot. You star as Alfred Chicken and your goal is to make it through a strange land filled with cheese, snails, balloons, and smiling sunflowers. If this sounds like an intentional acid trip, it is (probably). It definitely feels like it’s trying to capture that Mario-esque sense of weird, but Mario did it naturally, and it played like a champ. Alfred Chicken throws in everything it can to weird out the player, and it does, but in more of an unsettling, creepy way. I highly doubt this was the point, as the game was very much made for kids, but the creepiness remains. Basically, the only reason to play this game is because it’s weird as hell. Otherwise it’s an average platformer starring another me-too sidekick in the era when Mario and Sonic were the only ones that mattered.