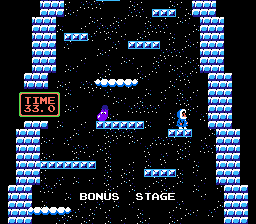 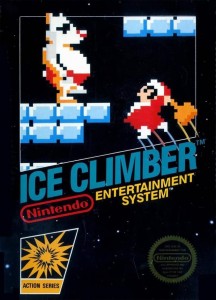 That polar bear had it coming, I’m sure. 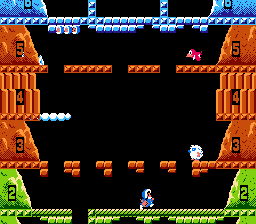 When you die, you turn into a snowflake! Not pictured: your character’s death or any sign of a snowflake.

If there was ever a doubt that Nintendo didn’t come up with some downright crazy gaming concepts back in the day, let Ice Climber forever silence those doubts. Depending on whether you choose single-player or two-player, you select either the blue or red ice climber. Your goal is to ascend one of thirty-two mountains, each with eight different levels of ice to “climb” through, among other various perils. Plushy ice creatures, big red birds, and polar bears with sunglasses are your enemies in your desire for mountain conquest. The plushies will fix any holes that you’re trying to use to ascend the mountain, the birds will fly obnoxiously around your head, as birds do, and the polar bears will push you off whatever level of the mountain you’re on, if you can’t kill them first. Whoever said conquering mountains was easy? After you climb past the waves of enemies, you enter a bonus round, where you can climb even higher to the very top of the stage, all the while collecting vegetables for points (Nintendo really had a thing for vegetables back in ’85, didn’t they?). Should you make it to the top, you then jump onto the hooks of a pterodactyl that’s randomly flying around and – ta-dah – 20,000 bonus points is you! True story: I readily accepted every facet of this game as normal when I was a child.
Ice Climber is a moderately fun relic of the past. The game’s at its prime with an additional player helping (or hindering) your ascent, but even in one-player, there are some good times to be had. However, while each of the thirty-two mountains has a slightly different layout, you will begin to experience deja vu very quickly. Your tolerance for this game will vary depending on your love for well-timed jumps and how well you can master the unnaturally slippy controls. Yes, you are an eskimo standing atop sheets of ice, but that doesn’t mean every step you take has to mean instant death. Also, being able to select any stage you wish on the opening screen takes away some of the challenge. Still, for one of the first NES games ever released in the States, Ice Climber holds up surprisingly well.
B-
FUN FACT: The plushy ice creatures were originally seals in Japan. Since clubbing seals isn’t looked too kindly upon here in the States, Nintendo rightly changed the enemies (I guess clubbing snooty, sunglasses-wearing panda bears was ok at the time). I, however, grew up clubbing seals, thanks to my bootleg copy of Ice Climber contained on a 42-N-1 cartridge from Thailand. Don’t worry: I have yet to club – or even desire to club – one seal in my non-virtual life, leading me once again to believe that video game violence does not lead to random acts of violence in the real world.
The following two tabs change content below.