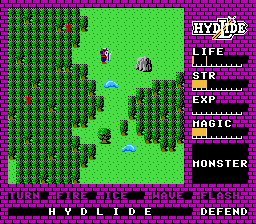 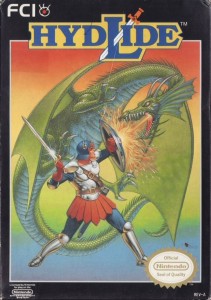 A technically decent, if not completely boring cover.

No EXP, eh? My friend, you’re in this journey for the long haul…

Hydlide lives up (or down) to the hype: it is a broken, frustrating, and most importantly, tedious action/RPG. Before I played the game, I assumed that it borrowed liberally from both The Legend of Zelda and Dragon Warrior. Like Zelda, you fight monsters in real time on a huge overworld and you have to figure out for yourself where you need to go. Like Dragon Warrior, you are a knight off to rescue a princess and some jewels or something and the initial enemies you fight are slimes! Come to find out, Hydlide actually came before either of these games, which means that, perhaps, Zelda and Dragon Warrior were influenced by it? Either way, both Zelda and Dragon Warrior refined what Hydlide was attempting to do.
For example, the combat system: instead of brandishing a sword or going into battle, you press ‘A’ to switch between ‘defend’ and ‘attack’ and then press on the enemies with your character. It is unique, and works surprisingly well, but it takes far, far too long to level up. I must have fought a couple hundred slimes and I still hadn’t leveled up once. On top of that, you must remember to save at all times. Slimes, though weak, will still take down your puny life bar completely in about three turns, if you’re not careful to attack from behind or below them (and even that doesn’t work all the time). Now, strangely, walking around in the fields will heal your character, so there’s that, but slimes can still surprise you even if you’re trying to avoid them. As for my own experience with Hydlide,after fifteen minutes of non-stop attacking slimes, I almost leveled up before a slime killed me. My previous save was probably within the first five minutes and I decided I had already experienced enough slime goo on my sword for one day, thanks. I’ll take the outdated, but still playable Dragon Warrior and Zelda over this misguided, well-meaning piece of dump. Even if Hydlide contained an interesting plot with memorable characters and unique locales, I still wouldn’t want to sludge through its worthless combat system in order to experience it.
F
The following two tabs change content below.