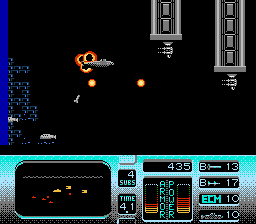 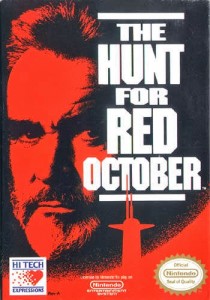 Turrets in the darkest depths of the ocean? Insanity!

How does one make a video game about tensions between Russian and American naval units in the mid-80s? Will it be an Alec Baldwin/Sean Connery shouting match? Will Tom Clancy cameo as Guy Eating Sandwich Atop Submarine? Seriously, what can a developer do to accurately bring this book-turned-movie into a halfway decent video game? The answer is, of course, side-scrolling submarines! That’s right: The Hunt for Red October is a side-scrolling shmup. The latter means everything and nothing. On one hand, it’s probably the only way Hi-Tech Expressions – or any other developer for that matter – could have adopted such a bizarre license into a halfway playable game. On the other hand, why was “The Hunt for Red October” turned into a game at all? Out of almost every movie game I’ve played, this particular title makes the least amount of sense. But Hi-Tech made it, it was released in America, and thus, I have no choice but to write about it.
Yes, The Hunt for Red October is a submarine shmup. Taken as a ground-breaking niche game, I’ve certainly played worse. Your submarine moves slowly, true, but the controls are surprisingly tight. Navigating the sub around never feels too tedious. You have two different types of missiles: straight-ahead and above-ground. Above-ground missiles are basically useless, since you can easily avoid any type of weapons above-ground enemies drop on you. Everything in the water, however, needs to be either maneuvered around or killed. I swear, in Red October‘s universe, the Russians are light years ahead of us. They basically have underground water bases designed to kill you, the lone wolf American sub. It’s crazy, I tell you! Beware especially the enemy subs which fire a string of seeker missiles that will obliterate your life. The latter enemies might be the hardest, but navigating around the perils of the ocean is no easy task. You’ll have to swing your sub through craggy underwater areas, complete with falling rocks. You remember the water level in Teenage Mutant Ninja Turtles? Yeah, like that, except you’re a sub.
Despite my amazement that Hunt for Red October plays as well as it does, given the source and the way the developers handled the material, it’s still too frustrating and mediocre for its own good. There’s nothing achieved within this game that you couldn’t obtain from a different, better game. Other than that bizarre Tom Clancy image. That guy really needs a new pair of glasses.
C
The following two tabs change content below.