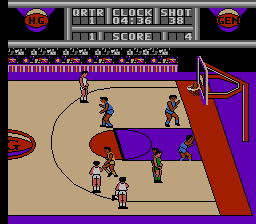 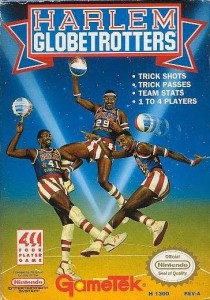 The gods must be crazy! 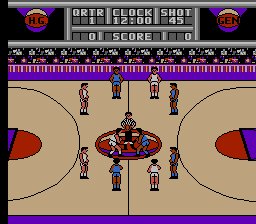 Even the color scheme hates this game.

What child of the 90s doesn’t remember the Harlem Globetrotters flagrantly breaking every rule of basketball? They were more circus sideshow than actual team, but they entertained the crowds for years with their zany antics. Kicking a basket ball from half court and making it in the hoop? Outrageous! Twirling the ball atop their entire bodies? Sensational!I always felt bad for the opposing team. They knew what they were getting into, and yet, they played the Globetrotters anyway. To the losing team’s credit, I’m sure the Globetrotters’ antics could be stopped, but contractual obligations probably prohibited the losers from doing so. I hope those guys’ paychecks were just as large. Humiliation goes down easier with money.
Whatever kind of strange, logic-defying basketball moves you hope to pull off in Harlem Globetrotters for your NES won’t be found, save for a strange bouncing half-court maneuver you can do by pressing ‘Start.’ Other than that, this is run-of-the-mill basketball at its laziest. I’d call it ‘arcade’ style basketball, but when I think of ‘arcade’ basketball, I also think of fun. It’s not a ‘sim,’ either as it lacks stats and micro-management. What it does excel in is frustration. Largest case in point: when you have the ball, you can naturally pass it to other team members; however, when the other team has the ball, you can not switch to different team members. What? How on earth are you to stop the opposing team? Basically, you hope to God that whoever was last selected on your team is close to the guy who has the ball on the other team. Even in the NES era, this gaffe shouldn’t have occurred.
The Globetrotters NES game is a mere prelude to the real Globetrotters game (unofficially, if nothing else): NBA Jam. I can be honest and say I’ve never played NBA Jam, despite my affinity for arcade sports games. Everything I’ve read and seen about the game, though, suggests a silly over-the-top ridiculousness that – let’s face it – is exactly what the Globetrotters are all about. Granted, even I don’t think the Globetrotters had the power to set balls on fire, destroy nets with the power of their minds or recruit Bill Clinton, but if they could, they would.
C-
The following two tabs change content below.