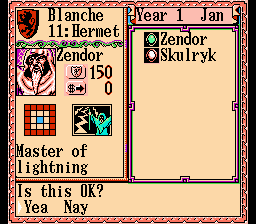 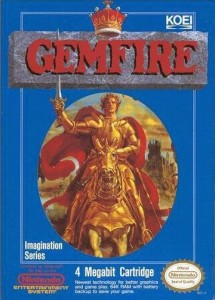 Gotta hand it to Koei, they always produce quality covers. 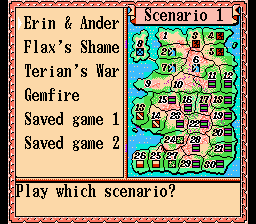 I am awful at strategy games, which means that Koei games and I rarely get along. Quite frankly, I’m surprised Koei’s still going as a developer. If it weren’t for the continued success/milking of the Dynasty Warriors series, I can’t imagine they’d still be around. Who – who, I ask you! – purchased all of the Romance of the Three Kingdoms games? Or Aerobiz? Yes, I’m essentially retreading the opening paragraph of my Bandit Kings of Ancient China review, but let’s face it: it takes a special kind of gamer to embrace all of the depth and trial and error that Koei games have to offer. I will question Koei’s appeal until I get answers, confound it! Answers! As for me and mine, I prefer no-nonsense, button-mashing action that 95% of all NES games provide me. Still, it is my sworn duty to try and review every game in the American NES library. If play a Koei game I must, then play a Koei game I will; even if I have no idea what’s going on.
Let’s start with the story, shall we? In a severe break away from their typical Historical Chinese Warfare Simulations, Koei brings us a fantastical tale of a crown with seven gems. These seven gems have been scattered across the fictional land of Ishmeria, with each gem containing a magical guardian, six wizards, and a dragon (those are some large gems!). Six gems have attached themselves to six different families across the land, for some reason. Only one family can rule Ishmeria, so it’s up to you to align yourself with the strongest family, take out the other five families, get those gems for yourself, and begin a bloody, tyrannical reign!
My sweet heavens, is there ever a lot to do in this game. It’s been twenty years since this game’s initial release and the amount of information crammed into this game is still intimidating. There are four different scenarios in which to play out. To beat the game – to the best of my knowledge – you must defeat all four scenarios. Each scenario requires you to choose a different family to side with. Different families can be easier or harder to play with, depending upon the amount of gems, and thus power, that they already have. In each scenario, there are four different paths to choose, meaning that there are ultimately sixteen ways to play the game. Ridiculous, overwhelming, Koei! When you begin a scenario, you can choose to battle, build up or trade your resources, develop land, ally, negotiate, sabotage, or plunder opposing families, among many other options.
This might be a good game for Koei and strategy fans. What else on the NES, other than maybe some RPGs and other Koei games, offers this much content to wile away your days? Unlike Bandit Kings of Ancient China, however, which eased you into the game, Gemfire throws you into the fray, hoping you have some clue as to what you’re doing. Even a detailed reading of the instruction manual did little to assuage my confusion. That, friends, is poor game making and likely a reason for why Koei games didn’t find more of an audience. Unless you have mountains of time and an inclination for old strategy games, I highly recommend leaving the gems alone in the land of Ishmeria. Let the families kill each other fighting over the gems, and the fire that they apparently leave in their wake. You have better things to do.
D
The following two tabs change content below.