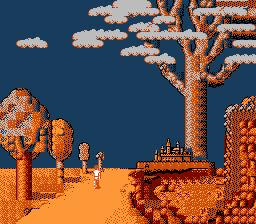 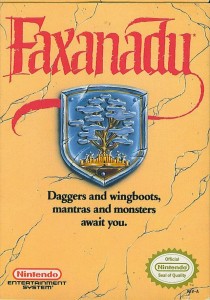 It’s a nice change-of-pace to see a simplistic game cover like this. Well done, Falcom! 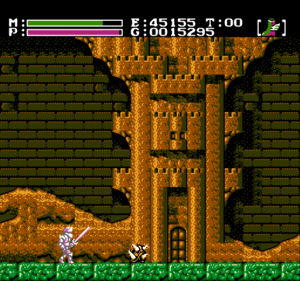 Dat spike (s). (thanks to MobyGames.com for the screenshot)

It’s hard to properly review RPGs on this blog (unless, of course, they are as derivative as Faria), but what the heck! Faxanadu, ho! In all fairness, Faxanadu is an action-RPG, but it’s a mighty long and difficult one. Story: elves versus dwarves, but things get more complicated. Blather and balderdash aside, you’re a hero on a mighty quest and isn’t that what’s really important? Towns, weapons, needless grinding (though not too much) – it’s all here! But like any discerning retro gamer, one takes a retro RPG’s fundamentals, accepts them, then looks for the differences. In other words, what makes Faxanadu worthy to join the echelon of classic warrior tales on the NES? Well, the game is completely side-scrolling, which was fairly unique for even an action-RPG. The side-scrolling streamlines the exploration process, which can often feel like a chore in the majority of older RPGs. The battle system is a lot like Zelda II, but a little slipperier. Your character feels like he attached butter sticks to his feet and is always sliding around. Despite his butter slippers, what’s nice about combat is that you don’t really fight for experience. You fight for gold so you can buy the most expensive armor and weapons. You do gain experience, and in each town, there is a guru who will bestow different titles on you, depending on the amount of experience you have. All the titles do, besides make you sound attractive to the ladies (“why yes, I am a Paladin”), is give you extra gold every time you’re bestowed a new one. So you see, it really does come down to the bling. And the women.
While I didn’t dislike Faxanadu, I understand that it’s a fairly revered cult classic. Certainly, it’s better than a lot of similar-playing ilk on the NES, it has some interesting concepts, and I wouldn’t suffer through a full play-through. It didn’t capture my imagination like I had hoped it would, though, and that’s what counts. Again, for those of you Faxandu-gooders who are frothing at the mouth, pitchforks in hand, read: it’s not a bad game. I just wanted more.
B-
The following two tabs change content below.