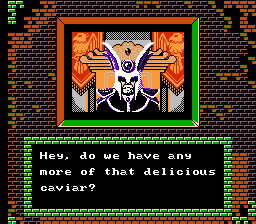 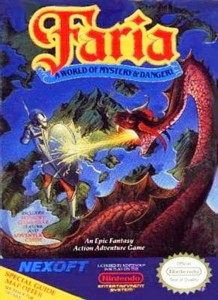 I wish the game were as interesting as this undercooked cover. 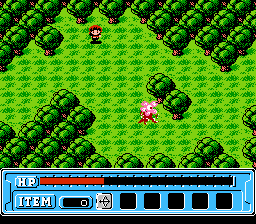 This is the battle screen on the overworld, and that’s all there is to say.

I enjoy old games, especially NES games. If I didn’t, then it would be downright masochistic of me to continue this blog, eh? That being said, just because I love old games doesn’t mean I necessarily love old mechanics, especially those used in early Japanese RPGs. I know, I know: I gave all four Dragon Warrior games “A” scores. I respect the Dragon Warrior/Quest series because they were some of the first RPGs of their kind, inspiring countless imitations. While I think the first couple are outdated, they’re still simplistic and charming if you care to invest the necessary time to complete them. Faria, however, is an RPG that desperately wants to ride on Dragon Warrior‘s coattails, with a dash of Zelda II apparel thrown in just ’cause. Unfortunately, said mixture is a bland, tasteless affair, not at all pleasing to one’s palate.
Faria has you inhabiting another nameless soldier off to rescue another nameless princess. Graphics? Quaint and sometimes terrible, especially when you’re talking to the denizens of the towns. Music? Not at all interesting. “Random battles” is the keyword of the day, as you will be engaging in hundreds of them. It took me at least fifteen-to-twenty battles just to level up once, and you’ll need to level up at least two-to-three more times in order to progress past the initial area. The battles themselves remind me of Zelda II, only from an overhead perspective instead of side-scrolling. Instead of a traditional RPG that gives you a menu and several options to choose from, here you can only hit the enemies that come at you. It seems ok at first, but it gets old quickly. You’ll need Ultra Retro Gamer amounts of patience and maybe even an FAQ to venture past the initial areas, so only those with dozens of hours to lose in an boring, obscure RPG need apply.
I’m not surprised this game has remained obscure, even in our current age where unearthing awesome, unheard of old games is all the rage. Faria doesn’t even try hard. It simply hopes the Dragon Warrior formula will work for it. It doesn’t not work, but it doesn’t distinguish itself. It’s a world of unappealing, unoriginal, uninspired gameplay.
D
The following two tabs change content below.