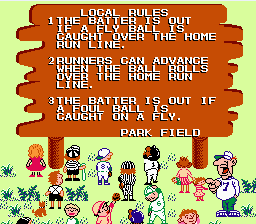 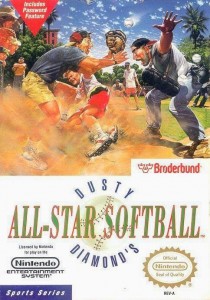 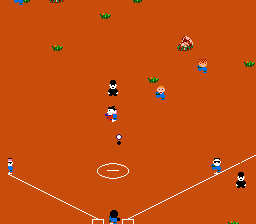 I can almost taste the sweat and nostalgia.

Other than having an long, unwieldy, and objectively silly name, Dusty Diamond’s flaws are few. It’s been many a month since I picked up a baseball/softball/Calvinball game so I’m happy to play one that feels like a lost childhood gem. TOSE really captured the feel of playing softball with your friends. You choose between a number of different areas to play: the sandlot (really!), the school, the park, etc. All carry nostalgic remembrances of one’s youth before time and life crushes one’s soul. The potential players of your team (and there are a lot of them – over 50 at least) look like a cross between the River City Ransom boys and rejected Earthbound caricatures. In other words, awesome. The mechanics are where this game really shines. Batting and pitching feel fluid and smooth and it’s never a chore to figure out where the ball is going next. Yes, this game would be a near perfect representation of playing softball with one’s friends if not for the difficulty. It’s pretty close to impossible to get a decent hit because, apparently, these kids are all looking to get with the Yankees in about five-to-ten years. Once you play for awhile, it does become easier, but until then, I recommend picking the “slow pitch” option on the title screen until you get the hang of the opposing side’s pitches. Look past Dusty Diamond’s stripper name and the silly difficulty and you have one of the best hard/softball games on the NES. Word.
B+
The following two tabs change content below.