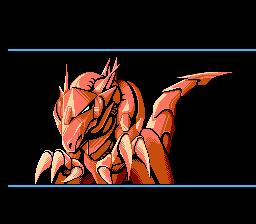 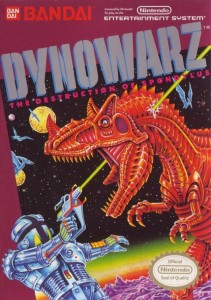 I nominate this for the most epic NES cover ever. Boba Fett against a space T-Rex? Radical!

The letter ‘D’ goes out with a bang with the brilliantly titled Dynowarz: Destruction of Spondylus. I for one feel that it was about time Spondylus got brought down a couple notches. See the game through to completion and what do you know! He gets destroyed! Bandai’s take on Contra involves shooting segments, jumping segments, and robotic dinosaur in space segments. What more could a child of the 80s ask for? You begin the game underground as a wee little man. Once you shoot the appropriate amount of bad guys, you find your Mechanical Dinosaur Suit (there it was, next to the baking powder!), get in, and take down other like-minded little men in dinosaur suits. But in space! This game is Japanese to the core, which is really how it should be. Not much happens other than shooting, shooting, and more shooting, but can you really begrudge that against a game called Dynowarz? Enemies will drop weapon upgrades, some useful, some not. As a dinosaur, I enjoyed the fire pellets. As a wee man, I enjoyed the three-pronged gun. The game is not hard in the slightest, although jumping in what I assume is your gravity suit can be a nuisance, if you’re not careful. Also, you only have one life, but you do have several continues and a password system. No crying allowed when you’re fighting against the one and only Spondylus, the purveyor of every Dynowar since 32XX!
B
The following two tabs change content below.