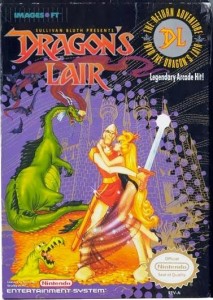 Imagine a child, who loved the arcade version, getting this for Christmas. Then imagine the dragon on the cover eating said child. 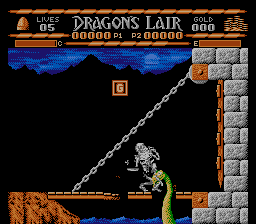 I hear ya, Bonesy.

Of all the important things I’m thankful for – family, food, friends, a job – I’m also thankful that I have stuck with this quest for as long as I have. Were I a weaker man, I would have turned back several times by now. Today would be a prime example. Dragon’s Lair may not be the worst game I’ve ever played, but its atrocities against humanity certainly propel it into the upper echelon. First off: every child of the 80s and 90s remembers the original Dragon’s Lair, right? It was an arcade point-and-click cartoon adventure directed by Don Bluth a.k.a. The “American Tail” guy. It was well-received for its time because no other game resembled it, but the better technology has become, the more obsolete and uninteresting Dragon’s Lair has become. Whether you recall Dirk the Dashing’s adventures fondly or not, the NES, uh, “adaptation” isn’t even worth picking up. I can’t recall whether I’ve ever had a game kill me so much on the first screen. Instead of a point-and-click adventure, NES Dragon’s Lair is a side-scrolling exercise in madness. It begs you to wonder what will and won’t kill you. For example, on the first screen, there is a drawbridge that will only open after you kill a dragon that pops out from under the bridge. Should you try and jump into the drawbridge, you will disintegrate into a pile of bones. Yes, wooden doors really are that powerful. Should you trip on the bridge due to a disappearing piece of the bridge, you will once again become a pile of bones. Don’t worry, though: bats can hit you over and over, and you’re good. In order to kill the dragon, you have to crouch down and throw your weapon before the dragon crouches completely under the bridge. The dragon is so savvy and Dirk’s movements are so slow that I couldn’t kill the dragon. Thus, I couldn’t get past the first screen and my experience with Dragon’s Lair came to an end. If a game doesn’t want you to play it, I say, why enrage it any further? Who knows what other horrors await me within the actual castle?
F-
The following two tabs change content below.