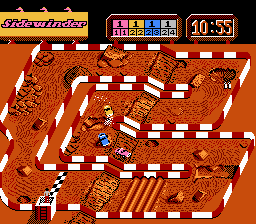 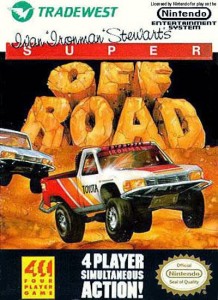 They’re so cute and dirty.

Do you know how silly it feels to write out that title? You should give it a try sometime. Anyways, thank goodness Ivan’s game is a solid off-roading experience. You jot down your name (your name can only be four letters long, but is there any other choice? That’s right: I-V-A-N), you pick your country (Japan, because they drive pink trucks, according to this game), and off you go. This game is essentially Danny Sullivan’s Indy Heat except instead of being in heat, you’re off-roading it on dirt tracks. Indy Heat‘s tracks are far more interesting than Super Off-Road, but Super Off-Road‘s difficulty is top-notch. The cars here are very aggressive and you better believe they’re looking out for the Duke of New York, A#1, which is themselves. You, Mr. Ivan Ironman Stewart, in your pink Japanese truck will have to “trick” out your “ride” in order to win: new tires, more turbos (don’t use them all in the first race like I did), some acceleration boost. Even with all that money spent, you may not win, but it will give you a fair shot. This isn’t a “normal” off-roading experience, after all. It’s Super, baby, as only Ironman himself can bring it.
B-
The following two tabs change content below.