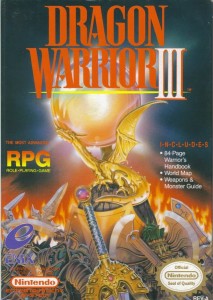 Look at all that loot! Incidentally, the game itself is worth a pretty penny now. 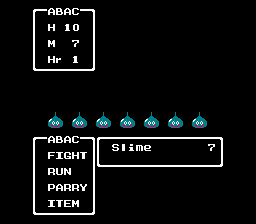 Dragon Warrior III is the last entry in the so-called “Erdrick” trilogy, and it is by far the best and most essential Dragon Warrior yet (until the fourth one). As I’ve repeated ad nauseum, what I appreciate most about the Dragon Warrior games are their consistency and their willingness to take on only one or two new features at a time and do them really well, instead of changing the series structure time and time again with mixed results. Dragon Warrior III adheres to that formula by adding classes such as fighters, soldiers (warriors), pilgrims (healers), wizards (mages), among others (including a “goof-off” class, if you’re feeling lucky). Interestingly, once one of your secondary party members hits level 20, you have the option to change classes. This knocks them down to level 1, but they retain their skills and stats learned in their previous class. You could make supermen with the crippling attacks of a soldier and the spells of a wizard. It’s a neat twist and gives you a reason to grind some more (as if you needed any). Sick of having half your gold taken away if you die in battle, like in the first two Dragon Warriors? Store some of it in a bank. Little touches like that pepper the game and acknowledge the few grievances from the previous entries. I could go on: the day/night cycle when you’re out on the battlefield is really cool, as are the story’s links to the original Dragon Warrior. Since the game came out towards the end of the NES’ lifecycle, it’s rare and hard to find. I recommend tracking down the Game Boy Color remake, as it adds some new features and just looks better. Either way, if you’re an old-school RPG fan, make sure to put Dragon Warrior III in your itinerary.