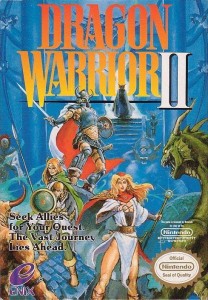 It’s amusing that Enix would put such ridiculous American box art on a blatantly Japanese RPG. 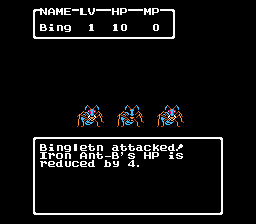 Not quite as iconic as the Slimes…

One reason I appreciate the Dragon Quest/Warrior series more than the Final Fantasy series is the consistency of the games. Each Dragon Quest contains the same type of gameplay and mechanics, albeit refined for each new addition. Even when they add new elements to the series, like the trading system from Dragon Quest IX, the game never feels like a completely new beast.
That being said, if you were not a fan of the first Dragon Warrior due to the ridiculous amount of grinding, you might find Dragon Warrior II to be more to your liking. While there is still grinding (it’s an RPG on the NES, for cryin’), the whole affair feels a lot less tedious. You acquire two additional party members, which makes for a less lonely journey. The basic principles of the first Dragon Warrior have been brought over: fight, level up, buy better weapons and armor, move to different towns, etc. But the graphics are more colorful, the story more cinematic (you play as the ancestor of the warrior Erdrick from the first game), and, most importantly, the fighting is a lot more enjoyable. The one negative I could give this game isn’t really the game’s fault at all. Enix was too darn slow in bringing it out to America. Within a year of this game’s release, Final Fantasy II (one of the few entries worth playing) was already blowing minds on the Super Nintendo with its Mode 7 graphics and such. Still, like an old, but comfortable hat, Dragon Warrior II may not be pretty, but it has plenty of well-worn charm.
A-
The following two tabs change content below.