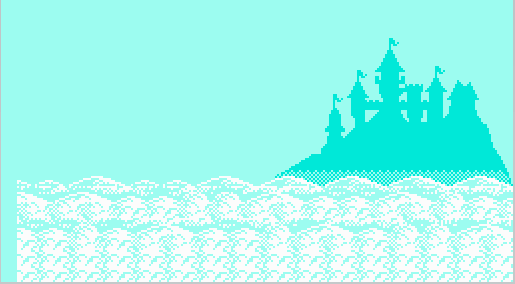 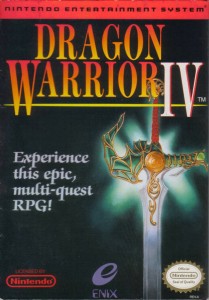 The final ill-conceived Dragon Warrior cover for the NES. 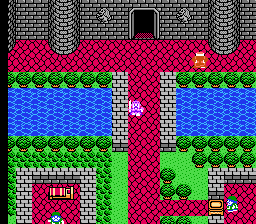 For those NES owners that loved RPGs of any flavor, the Dragon Warrior series must have felt like a Godsend. Where else could you spend tens of hours grinding away and building up your character (s)? Where else could you search for hidden treasure within tucked away caves? Epic quests rarely felt as epic as the Dragon Warriors. RPGs, while not lacking on the NES, didn’t have much of a presence until the early 90s and Dragon Warrior is arguably to thank for that, despite the lack of mainstream appeal. Enix released one Dragon Warrior a year from 1989 to 1992, despite the sales declines they saw with each successive game. They must have hoped that each entry would win the heart of the mainstream gamer, much like the original Legend of Zelda had twenty-five years ago. It’s a shame, then, that Dragon Warrior 4 was released in 1992, when many players (myself included) had moved on to the 16-bit pastures of the Super Nintendo and Sega Genesis. Dragon Warrior 4 is a fresh start to the series, and had it been marketed properly, could have lured gamers away from Final Fantasy II.
The heart of Dragon Warrior 4 is its story. No other Dragon Warrior had made story such a key element to the game, and while none of the previous entries really suffered for it, Enix made the right decision to go gung-ho with this one. The game is divided into five different chapters. With each chapter, you control a different character, each with a different set of skills than the previous. The following are not spoilers, as you can find summaries of these characters within the manual of the game.

Chapter 1: You control Ragnar the warrior, who’s put in charge of rescuing some missing children. Along the way, you meet Healie, a heal-slime that has a strange yearning to be human. He joins your party, and thus begins the longstanding Dragon Quest tradition of having monsters join your party.

Chapter 2: Alena is a princess who longs to be free of her castle and have adventures. She escapes from her bedroom and is joined by her two guardians, Cristo (?!) and Brey.

Chapter 3: Torneko Taloon is a merchant who wants to found his own shop. He abandons his family and heads to the Big City, where he hopes to find fame and fortune. Interestingly, Torneko is a weak character so it would be prudent not to engage in many fights. He can hire mercenaries to protect him, though. While he is a pseudo-joke character, he is charming, and his chapter defies RPG conventions even today.

Chapter 4: Mona and Nara are magic-using sisters who are trying to avenge their father’s murderer. They are joined by the warrior Orin.

Chapter 5: Finally, after many hours of playing as other admittedly cool characters, Chapter 5 sees you playing the Hero. After the Hero’s village is destroyed by monsters, his powers are revealed to him, thus sending him on a quest to rid the world of the evil Necrosaro. Along his way, he encounters all of the previous characters and they join forces to destroy Necrosaro for good.

For a series that began with the simplest of stories – go kill the evil Dragonlord – it’s astonishing that Enix was able to craft such a multifaceted tale, and bring the characters together so wonderfully. As expected, the gameplay basically remains the same, though with a couple new interesting additions, like casinos and the ability to save your game at churches. You can also search for Medals in the world and trade them in to get stronger, rarer weapons. Little perks like this add beef to an already meaty and expansive game.

Dragon Warrior IV remains an expensive and sought after purchase for the NES. Thankfully, about three years back, Square Enix ported it over to the DS with better graphics and an additional chapter focusing on the villain. The DS version will only set you back twenty bucks or so on Amazon, while the NES version costs about forty to fifty dollars. If you’ve held out from the Dragon Warrior/Quest series because of the extensive grinding, you have no excuse with this entry. While there are still random battles and some grinding, the story more than makes up for any tedium you would experience. Dragon Warrior IV is truly a one-of-a-kind cinematic experience for your NES.

A Dragon Warrior medley for your ears
The following two tabs change content below.