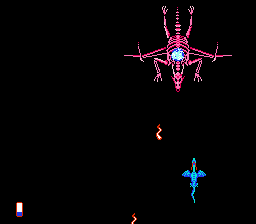 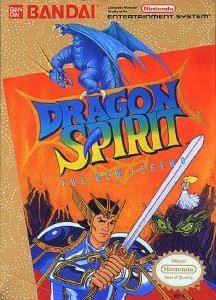 The game’s good, I swear! 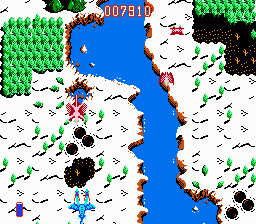 At the end of the world.

Dragon Spirit begins simply, brilliantly. In three lines or so, you’re informed that a warrior named Amru, who can turn into a blue dragon, is off to beat the evil warlord Zawel. You’re then thrust into a vertically scrolling shooter, with you controlling the blue dragon. After some brief skirmishes, you fight Zawel and destroy him. More cinematics inform you that Amru settles down and has a wife and twins. Amru dies suddenly, while one of the twins – the female, of course – is captured by the new evil entity of the land. It’s up to Amru’s son, Lace, to take up his father’s sword – thus transforming into the dragon – save his sister and destroy the new evil that has arisen. Then the title screen appears, informing you that, yes, what you just played/watched wasn’t the game: it was a prologue. Why is this important? It’s one of a couple appearances of a prologue in the entire library of NES games (Final Fantasy is another). I was shocked to learn that the character Amru, who I assumed I’d be playing with through the entire game, died mere moments after destroying an albeit easy boss. We expect high-quality stories from the majority of games we play today, but all we expected from an NES game was good fundamentals, with a fragment of a story to keep us moving. Dragon Spirit, along with Ninja Gaiden, began to herald a new wave of storytelling in console games, whether the developers (Namco and Tecmo, respectively) knew it or not.
As a shooter, Dragon Spirit stands the test of time. “A” controls your main shooter, while “B” controls your ground-level bombs. Enemies will come at you from both the air and the ground equally, so it’s essential to get the hang of both attacks. Power-ups are plentiful and unique. My personal favorite was the White Dragon, where your character sprouts two other heads that spit out two shots instead of one. Each level takes place around a nature setting, whether it be atop a volcano, amidst an iceberg, or just among the green plains. It’s a nice change of pace from shooting aliens in space. The dragon controls are smooth, thankfully, and he moves as quickly as you think he should. Fans of vertical shooters should definitely look into this forgotten gem, and if you’re not a fan but are looking to get into the shooter genre, Dragon Spiritis a good entry point. It has the challenge to keep you going, but not enough to overwhelm you.
B+
The following two tabs change content below.