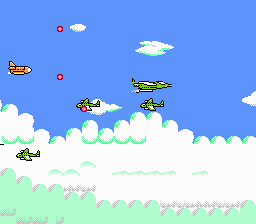 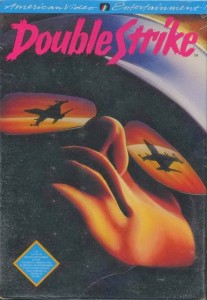 This cover’s cheesy, but so help me, I can’t help but get a patriotic tear in my eye when I look at it. 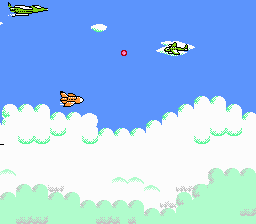 Orange Sherbet vs. Lime. Which will rule all the tastebuds?

I wonder if there are any Double Strike fans out there on the Intarwebs hoping against hope that I give their beloved unlicensed shooter a good score. I don’t pretend to think that I hold much influence or sway over the online retro gaming community, but it would be nice to get some crazed fan of ‘X’ or ‘Y’ game either praise or ream me for my review.  ANYWAYS, Double Strike is a slightly above average, yet incredibly addictive shooter from everyone’s favorite Chinese development company, Sachen. You know, the guys who brought you Master Chu and the Drunkard Hu! Well, put all negative/obscure thoughts about that game behind because Double Strike is a winner. I will describe it in one sentence: it’s as if 1942 became a horizontal shooter. You face an onslaught of green and gray planes, some larger than others. Red planes handle your power-ups, which range from bombs you can drop (appropriately with the ‘B’ button) or upgrades to your main firepower. Die and you lose your power-ups. Sounds simple enough, but the game is fast-paced and tough. They start you off with six lives, no continues, soldier, and if that’s too many for ya, well, suck it up and pretend you only have three. Then when you die three times, reset the game and start over. Like a man, I guess. Double Strike won’t break any originality awards nor will it get Nintendo’s coveted (and expensive) seal of approval, but it’s worth its weight in downloads.
B-
The following two tabs change content below.