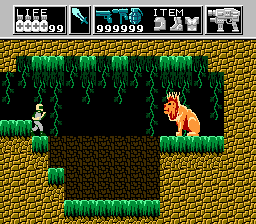 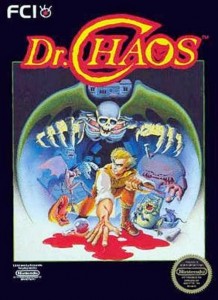 I wanted to rent this game as a child. I’m glad I didn’t. 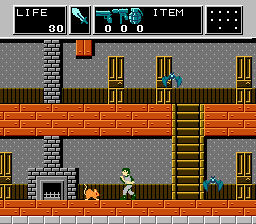 This is the side-scrolling portion of Dr. Chaos. I would have liked a little more yellow diarrhea color in the game, to be honest.

Dr. Chaos, you stand charged with confusing/boring the crap out of the good gamers who have tried to play your game. What say you?! I know what I say: Dr. Chaos tries desperately to be a hybrid of a side-scrolling action game and a first-person adventure, but like so many “experiments” on the NES in the late ’80s, it ends up exploding in one’s face. You, as an 8-bit Bob Saget, are thrust outside of a mansion with bats, rodents, and other miscellaneous vermin to stab. Once you enter one of the several doors outside the mansion, the perspective switches to first-person. From here, you collect handgun bullets, grenades, health, and… that’s it, I guess? All you do are open doors, windows, cabinets and collect things. The interface can be confusing. You can move north, south, east or west in any of the doors you enter, but in order to do so, you have to move the hand cursor all the way to the left or right of the screen. There doesn’t seem to be any pattern or reason to these areas. Collect what you can, then make it outside, but there’s nothing to do outside either. Am I saying that Dr. Chaos is a completely pointless game? No, because perhaps in one’s hours-long progress with the game, something could very well happen. In my relatively brief playthrough, however, nothing did.
D
The following two tabs change content below.