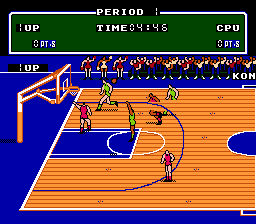 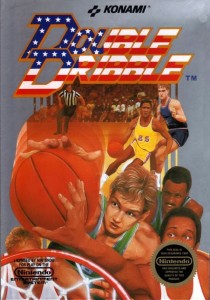 Before NBA Jam, Double Dribble “kept it real on the streets” or so I’ve been told.

My new favorite digitized speech sample on the NES officially comes from Double Dribble. The first words you hear when you boot up the game are a crackly, obviously Japanese voice saying, “Da-bu Daribu.” Some poor developer/sound engineer/janitor over at Konami of Japan was forced to say two difficult English words, and now it’s forever immortalized. Excellent! Anyways, for an early attempt at a basketball game on the NES, Double Dribble scores. It’s low on stat options, but it’s heavy on arcade action, which is exactly what I want from an NES sports game. The “B” button shoots the ball or switches to the next player and the “A” button steals/blocks the ball, or if you’re playing offense, passes the ball to the next player. Unlike the poor salaryman voice sample from the title screen, the controls feel natural and fluid, which is the key to success in any fast-paced sports game. And yes, the game is surprisingly fast, probably at the expense of the low-budget graphics. Seriously, at the beginning cinematic, the people look like piles of gray entering a stadium. Obviously, you’ll want to rock this game with another person. One player is still enjoyable, but lacking. Still, this is the best basketball game I’ve played on the NES so far – that I can remember anyway. It’s been awhile! Long live Konami and long live DA-BU DARIBERU!
B+
The following two tabs change content below.