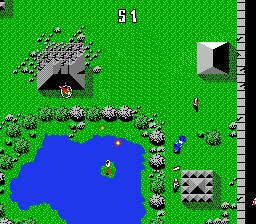 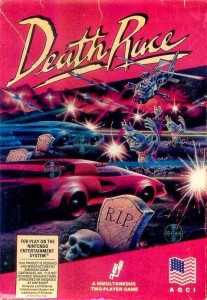 You don’t exactly race so much as you kill ’em all and let God sort ’em out. 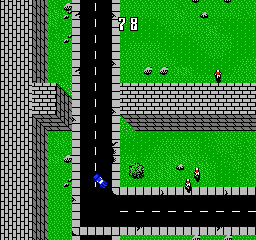 Death Race is what you get when you combine Gran Turismo, Twisted Metal, and the original Grand Theft Auto for your NES. Obviously, this is an unlicensed game, as the big guns over at Nintendo would never release this tasty little slice of red meat. No matter. Once you wrestle with the controls a bit (you move by pressing “Up” on the D-Pad) and get the hang of your death mobile, you’ll wonder why you had never heard of this game before. The goal: to destroy as many 8-bit citizens and helicopters and cars as you can before one of them – most likely the helicopter – makes you explode. The game really wants you to know what you’re doing, so use the money it gives you in the beginning to upgrade your car wisely. Personally, I recommend upgrading the speed, your guns, and strapping some missiles to your rig for good measure. The more collateral damage, the more money you get, the more death your vehicle can bring. Nothing else matters in this game. If it moves, kill it. I would think that in today’s violent gaming landscape, some NES historian would try and revive interest in this. Must we be cursed to read unlicensed game articles revolving only around Bible Adventures and Tengen for all eternity? Man, I’m a nerd.
B
The following two tabs change content below.