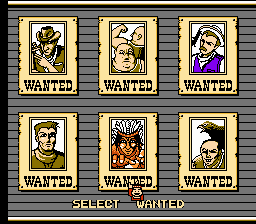 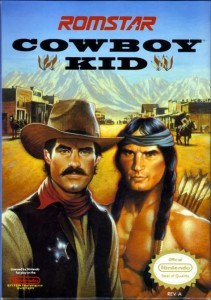 When cowboys and Indians work together, there’s nothing they can’t do!… except share land. 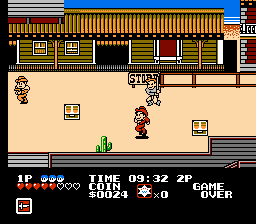 Romstar tries so hard. First, they have the impossible task of making Baseball Stars II as relevant and groundbreaking as the first, and then… Cowboy Kid, a noble stab at the JapanaWestern that’s following on the heels of the impossibly fun River City Ransom. Alas, the charm of a cutesy anime cowboy game quickly wears off after you bash your thousandth evil varmint. Story: You’re the sheriff over Random Desert Town and, wouldn’t you know it, banditos are tearing the place apart. Luckily, you have your trusty… baton? Yes, you don’t even get a gun to shoot enemies until later in the game, but that’s not the real problem. The hit detection is atrocious. In order to hit an enemy, you must thrust your stick while they’re still a few yards away. Otherwise, they’ll hit you even though they’re not touching you. There are six “levels,” each governed by the goal of taking down one particularly evil outlaw. Finding and bringing them to justice is the game. Fair enough. If only the gameplay consisted of more than hitting waves of bad guys poorly and buying nonsensical items in the hopes that they’ll be useful somewhere later in the level. Everyone in town carries an open-door policy and they’ll give you tips, but like Castlevania II, they aren’t worth much. Shame, really, as there’s much to admire about this game: the music is charming, as are the squatty renditions of Western towns. If only the game weren’t average like so many Little Caesar’s Hot-and-Ready’s. Sure, H&R’s may taste like something resembling pizza, but after the fourth piece, you’re ready for the real thing. In other words, go play Red Dead Redemption. It goes down easier.
C-
The following two tabs change content below.