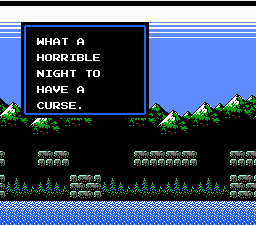 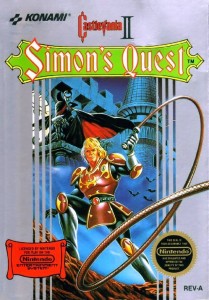 Dracula’s like, “Hey Simon, what’cha doin’ with that whip? Can I use it? I’ll give you a dollar.” 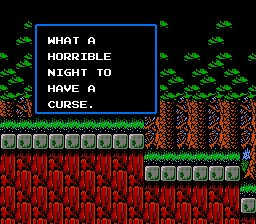 Every night’s a horrible night to be stuck playing Castlevania II!

Two sequels were released in 1988 for two red-hot games, the Legend of Zelda and Castlevania. The originals were among the most acclaimed NES games of the time so, understandably, the sequels were highly anticipated. Who would have thought that Konami and Nintendo would have messed with their successful formulas as much as they did? Zelda II: Adventure of Link turned out to be a mix between a side-scroller and a traditional RPG and Castlevania II: Simon’s Quest turned out to be… complete crap, actually. The original Castlevania was, to paraphrase my own review, “a masterful side-scroller,” “a whimsical romp through monster lore” and so forth. You hit creatures with a whip and feel awesome doing it. Castlevania II retains the whip action, but combines said action with a slow, confusing action-RPG. While Zelda II messed with the formula of the original, one could make the connection between both games. Castlevania II felt like a whole new beginning and, quite frankly, it was a journey that no one asked for.

When I say “no one,” what I really mean is “me.” I know I’m not alone in my hatred for Castlevania II, but I also feel like there exist a hardcore group of apologists; people that say, “Castlevania II was ahead of its time, man, you just DON’T UNDERSTAND!” It’s true, I certainly don’t understand the appeal of this game, but I do understand that only kids with a Nintendo Power subscription could decipher what to do in this game. Here’s me imitating a snottier version of myself playing Castlevania II: “Oh, of course merchants would be hidden underneath the floorboards! All I have to do is throw some holy water and the floorboards will vanish, it’s just so obvious…. If a river’s in your way, all you have to do is kneel by it. Duh, only a kid without Nintendo Power wouldn’t know that.” The only hints for where to go and what to do in the game are from one-line sentences of the townsfolk in the game: “Get a crystal if you know what’s good for you,” and “Did you know John Denver passed away?” Alright, the latter was definitely a complete fabrication, but it’s about as helpful as any bit of wisdom you’ll receive in the game.

Unfortunately, the side-scrolling segments – the segments that resemble the original Castlevania – have been reduced to crone vomit. Once you leave the town, you venture off into the woods/land of the monsters. Everything seems more Castlevania-y, until these words come up on your screen: “What a horrible night to have a curse.” With that, day turns into night and the enemies become much harder to defeat. A skeleton that took one-to-two hits now takes four hits. They’re not shy about running into you either, and they inflict more damage to you in the evening. Thankfully, you can return to town and have your wounds healed in the local parish. I know there’s a reason why the night becomes harder: Simon was cursed by Dracula at the end of the last game. Dracula’s curse is now making him weak and so, in order to reverse the curse, Simon must resurrect Dracula’s corpse and fight him again. It’s an interesting story for a game in 1988, but it doesn’t make the side-scrolling segments any less painful.

“But Dylan,” a Castlevania II apologist might say, “Perhaps in 1988, these are the kinds of long adventures kids craved on their Nintendo Entertainment System. Perhaps they wanted to spend hours upon hours trying to understand what kinds of pseudo-prophetic babble the townsfolk were spewing out at them. After all, they just spent their hard-earned paper route money on a fifty dollar game. What else are they going to do?” I completely understand that argument. If I was a kid who worked hard for my video games, I would fight tooth and nail to beat the game simply because I bought it with my own money, dag nab it. I also understand the argument that it tries something new. For Konami to completely change up the formula to a best-selling game is admirable. Also the game looks nice, the music’s still good, and the control feels as tight as ever. None of these admirable traits make it a good game, though. Unless you feel like Milon’s Secret Castle is the pinnacle of game design on the NES, in which case… Castlevania II still isn’t a good game. 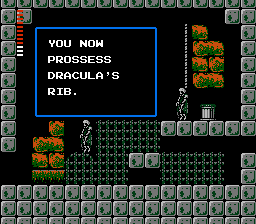 It’s everything I’ve ever wanted.*

*Special thanks to vgmuseum.com for the screencaps!