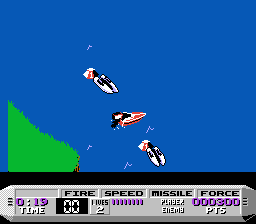 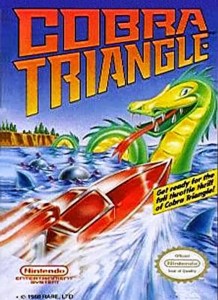 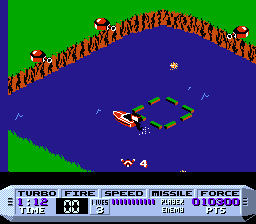 I was really hoping Cobra Triangle would be the sequel to Cobra Command seeing as, you know, they both have the word COBRA in the title. Alas, it’s yet another Rare NES game destined for the bargain bin of history. To digress for a moment, Rare is such a strange, on-again, off-again company. Before they made Donkey Kong Country, they developed almost forty games for the NES in four years. That kind of output is insane! As a result of such quick development time, many of the games produced during this era are, at best, average. After Donkey Kong Country sold six billion copies, though, they became Nintendo’s right-hand company. Everything they made for Nintendo seemed to turn to gold, until Starfox Adventures came along and Nintendo said, “You know what? Rare effectively killed Starfox, kthxbai” and ended their partnership. Microsoft came along and purchased them in 2003, thinking they made a wise move. Kameo, Grabbed by the Ghoulies, Banjo and Kazooie: Nuts and Bolts, and Perfect Dark Zero have been the fruits of the Rare/Microsoft relationship; that’s a large $375 million woops on Microsoft’s part. It’s only with a couple recent Kinect games that Rare has started to turn a profit for Microsoft. None of this has to do with Cobra Triangle, a bizarre RC Pro Am-inspired series of boating challenges that range from “playable” to “kill me now.” I just felt like recapping Rare’s history because, well, this is my blog and I needed an intro paragraph.

The cover for Cobra Triangle is not quite a lie, but it does imply that the game will be more action-packed than it really is. I was surprised when I booted the game up, saw a large dragon staring at me like, “Yeah, I see you, Dylan, and I’m coming for you!” I was expecting some hardcore shooting action, and instead the first level is… a boat race. You can shoot enemy boats and take some power-ups, but the whole level is over in forty-five seconds. Level two has you collecting more power-ups and avoiding an electrical surge in the water. Level three has you…etc. It’s not until level five that you actually face off against the giant dragon. I made it to level seven where the goal is to keep all eight hostages in a roped-off swimming pool from being taken by rival boats, before I died several times.

There’s nothing really wrong or right with Cobra Triangle and that’s the problem. The controls work surprisingly well, considering you have to control a boat that can move in a complete 360-degree angle. The music is decent, the graphics are tolerable, and the gameplay is challenging, if not ridiculous. Each level is only about forty-five seconds long, and it only has you taking on one challenge at a time. I wish Rare would have combined several of these challenges into decent-sized levels with full gameplay, but considering there’s a total of twenty-five stages and that each stage gets considerably harder than the last, I can’t say that Rare skimped on value. I guess I just don’t see the point of a boating challenge game. The whole premise is absurd and, frankly, a little boring.

I can’t remember if I’ve discussed this in a separate review, but purely average games like Cobra Triangle really piss me off. There’s no real attribute that detracts from the game’s simple tasks, but there’s nothing here that stands out as unique or interesting. Trying to write a review for such a middling game is a true exercise of my abilities as a writer; an exercise I believe I’m failing today. If you’re simply scanning through this review today, allow me to summarize: Cobra Triangle is the epitome of mediocrity, and for that, it should be cast into the fires of cartridge hell.