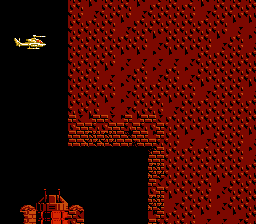 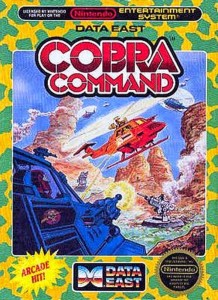 Can I get an amen? 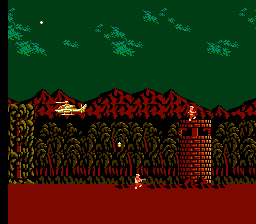 If napalm is the first thing you like to smell in the morning; if the sight of bloody carcasses and random explosions fill your heart with joy; if all you’ve ever wanted is to blow stuff up with a helicopter, Cobra Command is the game for you, friends. Much like Contra, it’s the equivalent of an Eighties action film in pixelated 8-bit greatness. You’ve got terrorists, explosions, hostages, helicopters, explosions, secret underground lairs, explosions. All the game needs is a exotic, busty hostage girl to complete all of the Eighties action movie cliches. Even without a girl, I wouldn’t doubt that Arnold himself is the pilot behind the helicopter, chewing on a big cigar with his stone-cold expression and no-nonsense approach to death.

In Cobra Command, you play as a helicopter pilot and your goal is to rescue hostages galore and destroy everything the bad guys throw at you. Needless to say, you’re in the jungle and each stage is hard as hell. The bad guys throw everything they have at you: other helicopters, tanks, rockets, grenade launchers. Thankfully, you can take up to four hits of damage, and you acquire shields, stronger weapons, and other items as the game progresses. Unlike most early NES games, you have four lives and three continues. When you continue, you lose all of your weapons and hostages that you acquired in each round, so it’s essential to learn how to navigate properly. These lives are not given to you in vain, either. Until you learn how to maneuver around the enemies without fail, you will probably die several times.

Perhaps the most impressive features of Cobra Command are the controls and the underground bases. While I won’t say it’s always easy to navigate a helicopter, the game’s controls felt incredibly realistic. Basically, you have a choice: you can fly quickly through the entire level, avoiding enemies and getting to where you need to go, or you can shoot constantly and, as a result, fly really slow; the slow, steady approach versus the reckless, don’t-give-a-crap mindset. You can also fly quickly, stop, shoot, then fly quickly again, but that can be jarring. I chose the slow, steady approach. If you take a bullet from an enemy, you only take one hit of damage, whereas if you run into another helicopter or missile, you’re instantly dead. Also, for some reason, I loved destroying a building and sinking my helicopter to go underground. It’s so over-the-top and satisfying to think, Yeah, you bad guys thought I couldn’t get down into this underground cave with my helicopter. You were wrong! COBRA COMMAND EXCELSIOR!

I was really surprised by how taken I was with this game. It is, at its core, a simplistic early NES game: all you really do is shoot stuff and rescue hostages. It’s just surprising how all of the mechanics work flawlessly here, when there’s so much margin for error. For example, when you see a hostage, a rope lowers automatically out of the helicopter, the hostage grabs it, bam, job well done. The first time I rescued a hostage, it was so seamless, I almost didn’t realize what was happening. It’s incredibly simple, but effective. The weapon/shield upgrade system seems like it would be revolutionary for its time. In the underground bases, there are places where you can land your helicopter and acquire upgrades. You can also switch between different weapons and shields anytime you want, simply by pressing Start. That sounds commonplace today, but in 1988, I imagine this took many gamers by surprise. I know I haven’t read many good reviews for this game, so I may be alone in my praise for it. All I’ll say is, Cobra Command kept me wanting more, and with the crap I have to wade through, I’m lucky enough to find a game that’s just average. Cobra Command definitely punches through average with a hardened fist of rage.