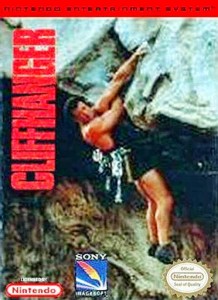 You didn’t deserve this, Stallone. 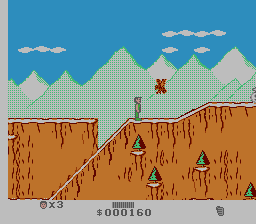 Stallone’s wistful time in the Spearmint Mountains came to a tragic end when a bird decided to peck him to death.

Sylvester Stallone had a poor run of films in the Nineties: “Rocky V,” “The Specialist,” “Demolition Man,” “Judge Dredd,” “Assassins,” even “Copland.” “Cliffhanger” is supposedly better than most of those, but very few movies are worth porting to seven different game consoles. What poor soul really needed to fantasize that he was Sylvester Stallone in Cliffhanger on the Game Boy? I remember having a similar conversation back at Bram Stoker’s Dracula, another game based on a movie released in 1993. I can see the appeal of going through Dracula’s castle, though (so can Konami). I can’t see the appeal of playing Gabe the mountain-climber who can’t speak properly. Did any of the three people that actually saw “Cliffhanger” think fondly of it as they walked out of the theater? Enough that they petitioned Sony to, please, for the love of all things, turn this mountaineer action movie into a game? In all seriousness, “Cliffhanger” obviously made enough money to turn into seven video games, so… whatever that means. Here’s the thing, though: if the game was good, I wouldn’t be making a big stink about it. The fact is, Cliffhanger is on par with an Acclaim/LJN abomination, a festering pustule of a game that doesn’t even attempt to distinguish itself.

Upon booting up Cliffhanger, you’re greeted with a horrendous series of screeches and bloops that I’m assuming is the movie’s theme song, or the developers attempts to destroy the earbuds of dogs. Does it matter what your character looks like? Well, when you’re supposed to be playing as Sylvester Stallone and you’re really a crudely drawn stick figure with a greenish glow surrounding him, it kind of matters. Yes, the graphics are of Atari quality, and I know nobody at Malibu Interactive cared because they knew no one would legitimately play this game… but still. Have some dignity in your work, people. At least give the stick figure some circles representing muscles or something.

What little story there is in the movie involves Sylvester Stallone chasing the bad guys across snowy peaks, but in the game, the bad guys have turned all the forces of nature against you. Wolves, birds, and chasms are all out to gore, peck, and make you fall. The controls are equally horrendous. Trying to connect your kicks or punches with an enemy is nothing short of a miracle. Jumping isn’t too awful, which is a plus, but running and jumping – which is necessary to jump over certain chasms – is strange. You have to press up and the direction in which you’re walking. If you’ve ever tried to do this on a stiff NES pad, it can destroy one’s patience faster tha Rambo can throw a knife into some dude’s face. Luckily, the majority of NES aficionados know about this game and have stayed their distance from it. I don’t get that luxury.

It was around the fiftieth time of the bird pecking me into a chasm that I said to myself, Dylan, you’re better than this. I‘m in my late twenties, friends. I don’t need to devote hours of my time to Cliffhanger: The Game just to prevent someone from playing it at all. If the above two paragraphs don’t frighten you anyway – if they, in fact, entice you to play the game – what more can I do other than to say, I did what I could. One thing about this game appeals to me: after you kill the final boss, you ride his corpse down the mountain. This may be one of the better endings to a video game that I’ve ever heard, but still… is it worth six levels of trials and suffering? Not the good kind of trials and suffering that lead to inner joy, contentment and peace, but the bad kind that lead to self-destruction. Just clarifying.