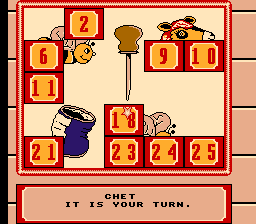 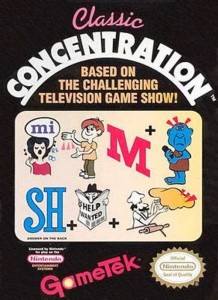 What you see is what you get. On behalf of the development team, I apologize.

Game-show video games are a tricky proposition. The fun of watching “Wheel of Fortune” or “Jeopardy” – more so “Wheel of Fortune” – is the possibility that maybe, just maybe, you could get on the show and win these extravagant prizes; after all, the contestants are normal people with a wife, 2.5 kids, a regular job. If you know an answer one of the contestants doesn’t, you get the pleasure of saying “Ah hah! I can do better than that shlub. I should go on this show!” But as is the case with all television, you’re watching an already programmed outcome. You can’t interact with the contestant and help them with the correct answer (“Millionaire” aside). You can’t do anything except sit back and watch the inevitable win or loss that involves someone other than you. With a video game, however, the outcome is theoretically yours. If you figure out how to overcome a game’s challenge, then you win. If you’re on a game-show and win prizes, the prizes are very real, although I’m sure there’s tax issues that come with them. If you’re playing a NES game based on a game show, you have more control over the outcome, but the prizes can never be yours; how can a cartridge present you with a brand-new microwave? Thus, the presence of the prize is irrelevant and there is no real purpose in “winning” in any game-show video game. And yes, I have thought too much about this one subject.

I remember watching the real “Classic Concentration” when I was a kid, but I didn’t remember what the show involved until I played the game today. Basically, it’s like playing “Memory” between two doofy-looking contestants. A board is presented with tiles that have the numbers 1 through 25 on it, with the actual puzzle lying beneath the covered tiles. Each numbered tile represents a prize, except for one number removed at the beginning of the game. Example: Let’s say you removed tile #1 and the prize says “Trip to China.” You would then have to find the matching tile, otherwise, so sad, you don’t win the trip to China. The more you uncover of the board, the more the puzzle underneath is revealed. The puzzle itself is a rebus, a series of pictures that represent actual words. Guess what the pictures reveal and you solve the puzzle. Solve two puzzles in a row and you get to go to a bonus round, in which pairs of cars are shown. Match the pairs together and you “win a car.” I’m bored just typing all of this, so if you’re reading this, my apologies.

I suppose game-show games could be fun in a party setting with a bunch of loud, inebriated individuals shouting answers around you, but by your lonesome, the experience of Classic Concentration is pretty pathetic. First, the contestants you can choose from look like very lonely, disturbed people who got lost on their way to the Love Connection set (a far superior game show with sexier results). You don’t want a loser representing you, do you? Second, the computers cheat like crazy. They must really want or need that microwave. Hey, Chef Boyardee can’t heat himself up! Third, what’s the point? Really, what’s the point? Even if you are a lost soul searching for “the one,” it would behoove you to heat a can of Beef Ravioli on the stove and watch reruns of “Suddenly Susan,” then to consider playing this game for legitimate entertainment purposes. Its whole existence is based on falsehood, and seeking out intimate connection with a liar, whether they be a real person or a cartridge, is unwise. Chin up, soldier. You’ll find someone someday.

FYI: I didn’t skip #137. Clash of Demonhead is a game that demands a more intense play-through. It’s witty, charming, and full of Japanese pith and vinegar. Look forward to high marks and, if all goes according to plan, a well-written review.