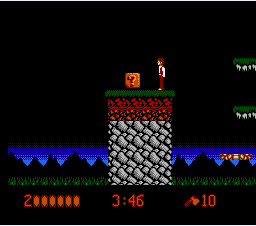 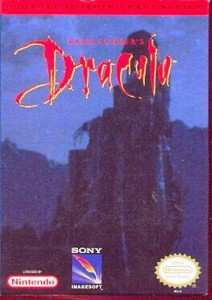 I’m not sure what the background is supposed to be. A skeleton in a rocking chair with a Pharoah hat on? 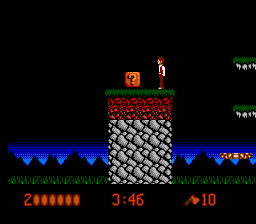 Get the coin, Mario-er, Renfield!

Back in the early 90’s, nobody gave a “guldurn” when it came to movie video game adaptations. Who would have thought to adapt Francis Ford Coppola’s “Bram Stoker’s Dracula” (heheh) into a video game for EVERY SYSTEM KNOWN TO MAN? The movie has violence, blood, vampire threesomes, so hey, why not make it into a video game played predominantly by prepubescent males? On a side note, remember “Cliffhanger,” the thrilling Sylvester Stallone piece? Yup, they adapted it into an NES game, and you better believe I can’t wait to play that gem when I get to the letter “C.” Anyways, when I play a game that was made for every system, I’m wary. Were developers really so swoll with cash that they were able to make five different versions (NES, SNES, Genesis, Sega CD, Master System?!)? Yeah, I’m pretty sure they would just make one crappy version and swap them around. Having never played the other versions of BSD (that’s how I txt the title to my friends, yo), I can’t say for sure. All I know is I’m surprised by how much the NES version doesn’t suck.

It’s your typical side-scroller, which in late 1993, was a played out genre on the NES. Nevertheless, it manages to get the job done. As I romped my way through the relatively easy stages, I thought of the game as “Castlevania-lite.” Not only do you fight vampires (each boss battle is a different incarnation of Dracula – which is surprisingly cool), you battle banshees, Hydes, ghosts, disembodied hands, the works. You even hit honest-to-God, lightly glowing, completely-stolen-from-Mario question blocks to get different weapons or items. Most of the time, though, unless you’re pining for extra hearts, you’re better off with just your sword; the axes have a bizarre range and the mini-orbs only work if your enemy is coming towards you in a straight line. Each world has two different levels and once you reach the end of the second stage, you fight my-first-Dracula. Rinse and repeat for five stages (or eight, if you’re on hard mode) and you’re done! The game is over in a snap, Drackle, pop.

Perhaps the worst thing I can say about the game is that nothing stands out. The gameplay is serviceable, but unremarkable. The graphics are passable, but nothing here screams “late-gen NES” like Kirby’s Adventure or the later Mega Man games; the animations too are sub-par. Controls are surprisingly decent, although every so often the main character’s becomes unstable from jumping, which can send him flying across the screen into pits of spikes or lava. The most offensive thing in the game would be the music, which tries desperately hard to sound orchestral and imposing, but instead comes off like a third-rate music student’s final project.

I know that, back in the day, game companies had movie licenses by the billions, and basically did all they could to ensure that, if a movie was made, a game adaptation wouldn’t be far behind (Hudson Hawk, anyone? I’m not kidding. It exists). My question is, who is the NES version of Bram Stoker’s Dracula marketed towards? My best guess would be kids who wanted to see all the violence, blood, and sex of the movie, but were too young so they had to settle for the game, in hopes that there might be some 8-bit pixelated “action.” Sorry kids: there’s not even any poorly rendered cut-scenes. For everyone else who just wants to play a game on a lonely Friday evening, you could do worse. You could also do a lot better (Castlevania III, for starters), hence my very average grade of…