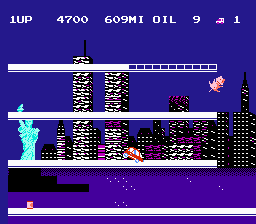 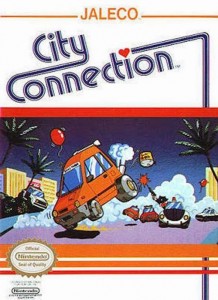 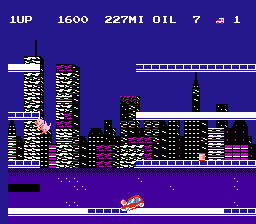 All the thrills of “The Fast and the Furious” and “This Old House” combined!

In today’s Fast and Furious times, if race-car enthusiasts want to “paint the town red” as the expression goes, they usually hold illegal races on streets in their respective town/city. This is done to “boost their street cred” and can potentially lead them to obtain their opponents vehicles, should they win the race. City Connection, a racing game born of bad nachos in the 1980s, begs to ask the question, what if a young racer wanted to literally paint the town white? Instead of showing that his car is the fastest or that it has the best drifting abilities, what if this young man’s only endeavor in life was to put buckets of paint on his car and paint every street white in the world? City Connection is the answer to that question that nobody had thought to ask, and the answer is, a lot of white paint, battered cop cars, and squashed cats.

When I first booted up City Connection, I saw that the first level had four tiers for me to drive on: the top, the two in the middle, and the bottom. I assumed it was a traditional early NES racing game that had you avoiding cop cars and cats. As I progressed, however, I realized that instead of advancing, sections of the level were repeating themselves. All of the tiers were colored white with sections of blue. I reset the game, looked up its premise, and laughed. Really? The goal is really to cover every section of the game’s “streets” white? Really?! Even for an early NES game, this story is stretching it. I guess Jaleco didn’t have enough money to invest in, you know, a real racing game. The premise seems like something better suited for the Atari, and indeed its simplicity leads me to judge it quickly and without compromise.

There are seven levels for you to avoid cats and cop cars. At least the cop cars you can hit with oil cans and they’ll go flying off into the distance. The more of each level that you paint white, the more the cats and cop cars come out in full force. I personally recommend that you paint each tier as much as you can before lowering yourself down onto the next, as it is really difficult to boost yourself back up. Each level, obviously, gets a little more difficult, but by the second level, you’ll be asking why you’re even investing time into this poorly conceived and executed waste of time.

I’d like to call attention to an issue that was probably overlooked in 1988, and if I may, address it to the Young Unnamed Protagonist of City Connection. My dear boy, that is a lot of paint to just flagrantly throw about all over a city with reckless abandon. You also believe that filled oil cans are acceptable weapons to throw at police officers. A travesty! I mean, throw whatever you want at police officers, but just think of the environment, would you?! Environmental codes in every city would say that you, sir, are damaging the native flora and fauna as much or more so than your double exhaust system in your CRX. If City Connection 2 were to exist, I would ask that you would re-pave the streets green, and litter the streets with flowers, trees and Al Gore dolls. Thank you.