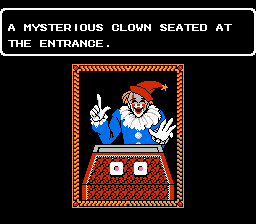 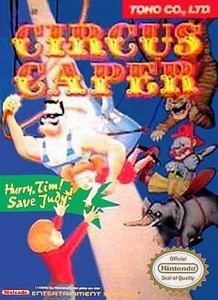 This is the best image I could find of this cover and it still looks like crap. A sign of things to come… 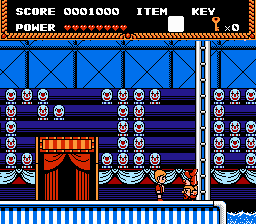 Even the audience is terrifying.

Aren’t capers those nasty, expensive, dark green buds that smell like ocean brine and butt? Yeah, rich people’s appetizers are one of my least favorite things ever, along with “the circus.” The circus has no reason to exist. It’s an abominable establishment that tricks children into thinking they’re having fun. No child gasps in wonder at disturbing mutated clowns doing parlor tricks or animals from Africa that can eat them or people that fall off of high wires. They do what any sensible person would and cry out in fear! Toho’s attempt to produce a game out of two things I hate is gutsy, but much like tired, embittered carnies and spoiled food, it fails to meet the mark.

You must watch the opening scene to Circus Caper. In fact, I will provide it for you here:

Have you vomited in terror yet? Two siblings approach a creepy eyeless clown outside of a circus. He only has one ticket left to the circus (that’s what he tells all the siblings), and he gives it to the sister. Brother comes back to pick up his sis – woops! Turns out Mr. Magic has stolen the sister for no apparent reason, yet all little Timmy can manage to say is “Shucks.” At this point, I wish Mr. Magic would kidnap them both and put an end to the premise of this game. The ridiculousness doesn’t stop there, oh no. As a carnival barker might say, “But wait, there’s more!”

Even Japan thinks circuses are evil, as evidenced by this game. While I obviously agree, the reasons for the game’s satanic undertones are the crappy controls and the hit detection. Little Timmy likes to flutter, which would be cool if he was a butterfly, but he’s a small child. He also likes to run into enemies. I’d like to say I’m responsible for that, that I don’t really know how to play the game, but no, Timmy just likes to get hit. Enemies can bounce in front of and on top of you, but if they’re not at the right pixel length from your character, you will not be able to kill them. Remember when bouncing on crocodiles’ heads to get across murky water was fun? I do. It was in Donkey Kong Country 2, published a few years after this game. In Circus Caper, in order to proceed past the second screen, you have to jump on and over the crocodiles. Each time you hit them you will be hurt or possibly die. I got past them once and quickly died, no thanks to the bouncy acrobat that decided his goal in life was to be “in my grill.”

Even if I had pressed on like a good little NES game reviewer and tried to get past those rapscallion crocs, there’s nothing redeeming about this game. I don’t like the evil circus atmosphere. I don’t like Timmy as a character, nor do I like the paltry story that has Timmy “gee-whizing” and “aw shucksing” all over the place. The idea that an evil circus manager would concoct this elaborate ruse in order to kidnap one child, is amateurish in an 80s cartoon way, and not in a “hey that’s kinda cool” way. Circus Caper is creepy, it’s stupid, and no one should have to play it. Thankfully, I’m pretty sure that, even at the time of its release, no one did.