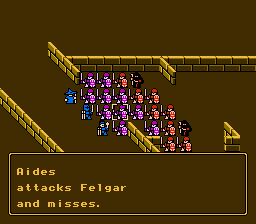 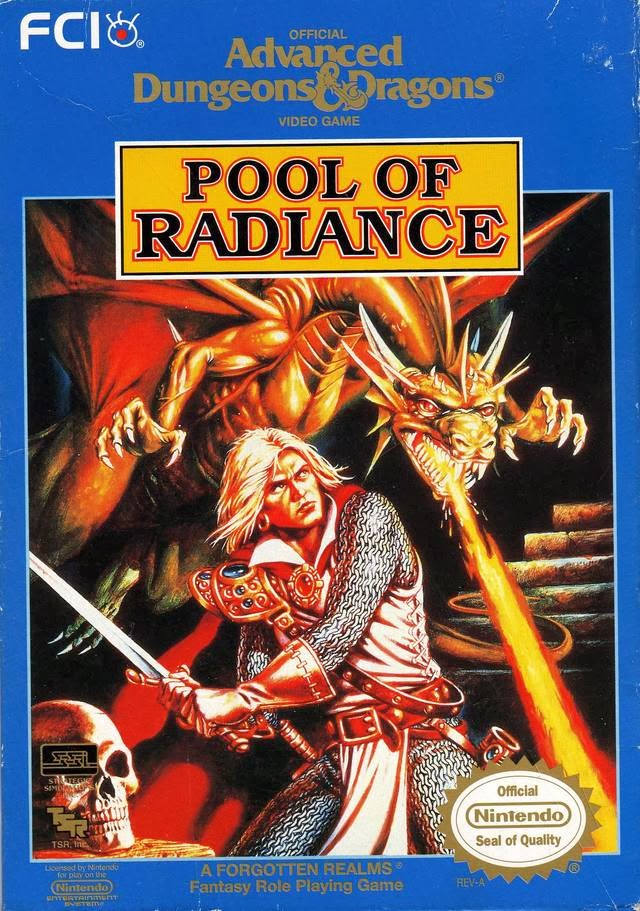 The warrior thinks the dragon is his only foe, but his real nemesis is that leering skull. 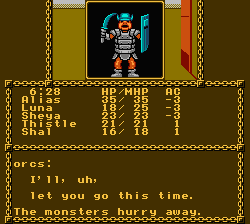 That’s right, Orc. Give my regards to Sauron.

Pool of Radiance begins similar to Hillsfar. Make a character, choose a class, race, etc. You’re then ushered into the city of Phlan by a tour guide. The city itself resembles a poorly-made Wolfenstein-3D level where everything looks the same. The guide is trying to tell me where the city council is, where the three temples are, where the “back streets” are, yet every stinking door looks like the one that preceded it. It doesn’t help that Pool of Radiance‘s color palette  range of stark gray and poop brown, painting everything that dull flavor that Nintendo D&D games are known for. Once my tour guide left me, I wandered around for awhile trying to figure out where to go before I just completely stopped. If a game is going to make itself incredibly difficult to even accomplish one’s first task, it’s not worth it. Can you imagine what the fools who made a FAQ for this over at GameFAQS had to go through? It would take a lot of mind manipulation to make yourself believe this game was even worth playing, let alone writing (or reading) a long, tedious FAQ about it.

At any rate, I’m just so happy to have made it through this tired, played out, new-jack horse crap. If you obviously, blatantly can not push the boundaries of the NES anymore than you already have, why release the stinking game? D&D die-hards had already played it on the computer. The majority of the NES crowd doesn’t give a +5 mace for these types of games. To the one person that was bracing themselves for Pool of Radiance on the Nintendo, bought it, then had their heart ripped out of their chest, my condolences. For the rest of us, it was merely a green loogie in an already full spittoon… or something.