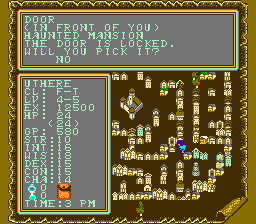 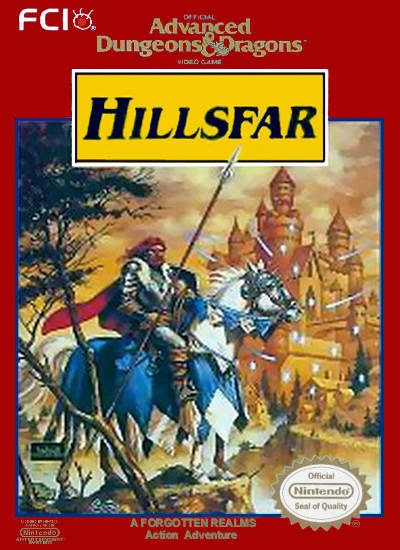 You forget yourself, sir, and the realm from whence you came. Get thee to the Far Hills- er, Hillsfar! 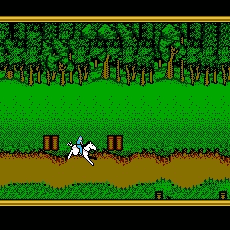 There, but for the grace of God…

Hear ye, hear ye! Should ye need a D&D game on your Nintendo that doth not sucketh as much as its brethren, gaze thine eyes upon Hillsfar, an RPG dungeon-crawler for all the land!
Well, maybe not all the land. Hillsfar‘s not a crowd-pleasing summer blockbuster, but unlike the other D&D atrocities for the NES, it contains competent gameplay. Start by creating your own character (the game also pretends that you can “import” characters from different saves, but let’s remember that you’re playing a Nintendo, not a computer – apparently the creators of the game forgot), get on your horse and ride to Hillsfar. Traverse dungeons, collect loot, fight enemies; typical RPG stuff.
What really makes Hillsfar stand out is the sheer amount of choices for an early Nineties adventure game. Walk into a tavern and you have seven options for what you can do/say while you’re there. I chose to buy the comely wench/waitress a drink and brag about my exploits (I hadn’t accomplished any, which was even more impressive). The wench was grateful/advanced on me, and everyone else thought I was awesome. I left the tavern on a high note.
Dungeon exploring is ok, if not a little repetitive. Fighting is ludicrous, though. The jerky animation of the enemy makes it difficult to know when you’re supposed to hit them. The animation, as a whole, is too advanced for the NES’ aged processor. Navigating through a dungeon is like wading in molasses. Walking in town is jerky step after jerky step. Riding a horse was the NES’ last straw; it just about exploded having to push those pixels. If Hillsfar had been ported to the SNES (which it could have, since it was released in 1993), the graphics would have been cleaner, the animation smoother. At least Tasslehoff and his cronies from Heroes of the Lance are nowhere to be found.
C-
The following two tabs change content below.