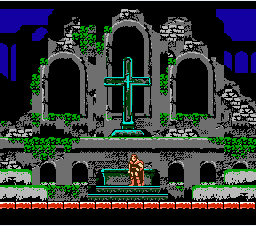 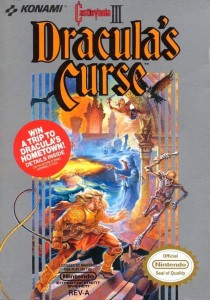 Win a trip to Dracula’s hometown of… Pennsylvaniaaaaaa!!!! 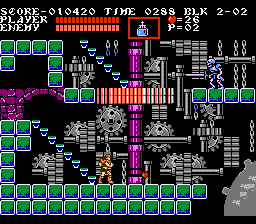 It’s still hard for me to come to grips with the fact that, as an avid NES player, I never rented the Castlevania games; yes, even the abominable Simon’s Quest, which I think I would have found a use for as a child. They’re games tailor-made for me and my horror/difficult platformer sensibilities. On top of that, CV I and III are two of the finest playing games on the NES. The seven-year-old me would have fallen in love with this series. But even at age 25, Castlevania III still impresses. Branching paths? Selectable characters? An epic quest? Sounds like the attributes of a relatively modern game, but indeed, Castlevania III is twenty-one years old this year and it contains them all. The fact that it looks, sounds, and plays brilliantly while succeeding on such a large scale, is a testament to how well-versed Konami’s developers had become with the NES.

Dracula’s Curse is one of the most perfect playing experiences I’ve had since I’ve started this quest. Yes, it’s really hard, and the hit detection is still cheap, but everything about the game just feels so right. Once again, the atmosphere is top-notch. This time, Konami incorporates elements of your environment into each level. For example, the Clock Tower stage has you jumping onto pendulums and gears in order to get to the top. The Dark Woods level incorporates owls that fly out from the – you guessed it – dark woods. The music is sublime, as always. My heart pounds with excitement every time I hear the stage 1-1 theme and that ain’t no lie. Outside of your inability to not fly backwards when hit by an enemy, the controls are tight. Most importantly, though, every element of the game’s construction just feels right. No one enemy is out of place, nor are levels just haphazardly thrown together. After the train wreck that was Simon’s Quest, it’s nice to play a well-thought out Castlevania game.

I would have been content simply whipping skeletons as Trevor Belmont, Simon’s plucky ancestor, but Konami gives you three additional characters to play as. Grant DaNasty (!) is a ghost pirate that can climb on just about anything. He’s really fast and nimble, but his knife has a short range. Syfa Belnades is a magician who can project fire, ice, and lightning spells. Ice magic is particularly effective for freezing enemies. Finally, there is Dracula’s son, Alucard. His main skill is the ability to turn into a bat. If you’re wanting to avoid enemies, this is the way to go. Unfortunately, his offense is weak, but he can take a lot of damage. To effectively beat this, the toughest of the three, you’ll need to use all of your characters. Unfortunately, you all share the same life-line, so if Trevor dies, you can’t switch to a different character. Beware: if you venture down the wrong branching path, you can miss obtaining Grant, Syfa, or Alucard.

Castlevania III was the last CV game for the NES, but the series has continued to flourish and re-invent itself. After Super Castlevania IV, Castlevania: Bloodlines, and the Japan-only Rondo of Blood, Symphony of the Night was released and nothing was ever the same in the Castlevania series again. While considered one of the best Castlevania games by old and new fan alike, SotN quickly changed the series’ direction. Castlevania games, once known for hardcore action, became known for castle exploration, leveling up, and insane storylines. The GBA and DS games – the predominant games in the series for the last ten years – soon became known as “Metroidvania,” for their close resemblance to the structure of the Metroid games. Personally, I think a game series needs to change and adapt to stay relevant and fresh, but it also needs to remain true to itself. The “Metroidvania” games lack a certain something that keep me interested like the old side-scrollers do. They’re not poorly designed by any means, but I just don’t feel as sucked in in to the Castlevania world as I do playing the older games. Thank goodness for Castlevania Chronicles on the PS1 and for the Dracula X Chronicles on the PSP (both now hard to find, natch). Without the latter two releases, all that old-school Castlevania fans would have are the 8 and 16-bit releases to satisfy their whip-snapping desires. Oh well. Whatever direction Konami decides to take the series next, I, and many other Castlevania fans like me, will be watching. Frankly, my interest in killing Dracula and his undead army of the night has lost no appeal. Besides, Konami may just have another masterpiece like Castlevania III up their sleeves. 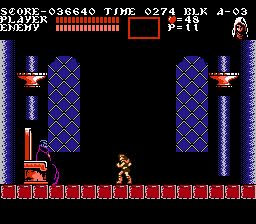 *Special thanks to vgmuseum.com for these screencaps!