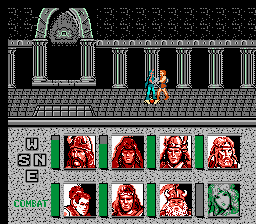 HEROES OF THE TOILET 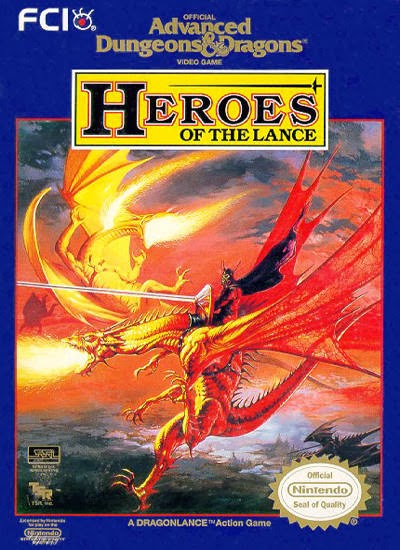 That is one sweet image, worthy of any nerd’s basement wall. 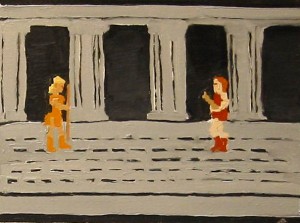 This painting accurately represents the horrors found in Heroes of the Lance.

Heroes of the Lance is bad. Really bad. Select one of eight porno stars- er… “warriors of justice” and find the Disks of Mishakal. These warriors’ names would purge chuckles from the stoniest heart: Sturm Brightblade, Flint Fireforge, Tanis Half-Elven (?!), and my personal favorite, Tasslehoff Burrfoot. Yes, that’s right… Tasslehoff. The warriors are displayed at the bottom of your screen, giving you the illusion of choice. In reality, each warrior is like an extra life. When one dies, you’re given another warrior at random. Like Dragon Strike, Heroes of the Lance was originally made for PC and ported over to the NES. The stiff atmosphere is telling, as are the controls. The game feels like it should have analog control for eight-way movement, yet our beloved NES controller has only four rigid directions. I never fully figured out what ‘A’ and ‘B’ did, except that ‘B’ was for attack when an enemy was near. ‘A’ seemed to help you run sometimes, but other times, it just stopped you dead in your tracks. The graphics are of an Atari standard, which isn’t something one would expect for a NES game published in 1991. Music is tolerable, surprisingly, but it doesn’t soothe your soul when you’re trying to slay some old curmudgeon because he’s kicking your Achilles tendon and draining your Burrfoot blood. Heroes of the Lance is suited for the patrons of the late-night S&M bars in downtown L.A.. If you enjoy code words and pain, Tasslehoff will be waiting.
F
The following two tabs change content below.