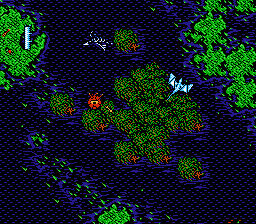 BATTLE TO THE DEATH, ETC. 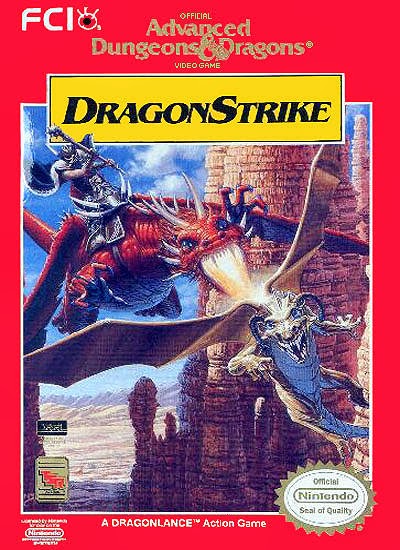 So… is Dragonlance a person? A company? A campaign? Help me out here, D&D aficionados. 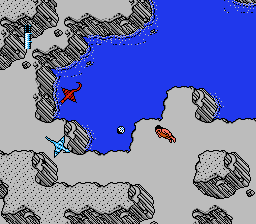 So a blue dragon, a red dragon, and a neanderthal go into a bar, right? A few drinks later, the neanderthal’s huckin’ rocks at the dragons, calling them his wives! He’s got a prayer!

A HEARTY DISCLAIMER: I have never indulged in the world of “Dungeons and Dragons,” so I do not pretend to know anything about its history, its worlds, its “characters,” etc. It was a road of nerdiness that I decided never to travel down, and I do not regret that decision. Please keep that in mind as you read my D&D reviews.

DragonStrike give you control of a dragon. You fly around, you shoot stuff, that’s about it. The dragon controls like a computer game. He can fly around anywhere on the screen, but his movement feels like it should be controlled by a mouse, not a chunky D-pad. Sometimes when you shoot projectiles at ships, people, other dragons, your attack hits them; other times, what projectiles? For reasons unknown, the dragon begins the game with a partially-filled life bar, and it only takes a couple bullets or neanderthal-heaved rocks or an over-sized rock wall to take you down completely. Never mind that you’re a dragon. Playing on the Easy setting helps quite a bit. Your health doesn’t go down as quickly, and enemies don’t take as long to shoot. It actually makes DragonStrike, dare I say, entertaining for a brief period of time. If Gary Gygax were to appear in a dream, roll a die, and command you to play just one of the Dungeons & Dragons games for the NES, make it DragonStrike. Trust me on this.
C
The following two tabs change content below.