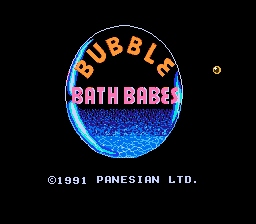 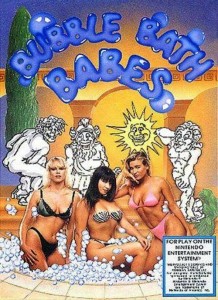 This is for your own good.

Bubble Bath Babes could have sold many a copy, were it not limited by its own “assets,” and I say that in all seriousness. It’s a puzzle game that reminds me of an upside-down Tetris combined with hints of Puyo Pop (…Mean Bean Machine, for you crazy mustachioed Americans). Basically, the concept is awesome, despite the lewdness surrounding it. A young naked woman is taking a bath at the bottom of the screen, and the bubbles that float up from her bath are the bubbles you arrange at the top. The bubbles come paired in fours and are in a variety of colors, while the object of the game is to connect four bubbles of the same color. Mix and match colors for combos and more points, a la Puyo Pop. Once you figure out how to rearrange the different colors within the bubble cluster, it becomes more fun than you would expect. One wonders why Parisian Entertainment felt the need to deprive themselves of potential millions of dollars by throwing naked women into a solid puzzle game.

The most ironic part of the game is that, while you’re playing, you don’t even notice the naked woman at the bottom of the screen. Because the gameplay is actually fun, and the bubbles float away from the image, your focus is never on the nudity. It is true that many of the bubble shapes resemble penises or just appear phallic (because we all know how arousing bubbles can be), but that’s the only reminder that, yes, you are playing a Nintendo game that was intended for adult shops only. I’ve read that the farther you get in the game, the more naked women come out of their bathtub to congratulate you on a bubble well popped. I can’t verify that, though, because, well, I don’t care about virtual boobies.

I still have two more “questionable” games to play through: Hot Slots and Peek-A-Boo Poker. I know what you, the reader, are thinking and you’re right: Hot Slots is a fantastic, hilarious name for a porn gambling game. Why have one vice when you can have two at the same time? Both of those games are worth a mint, by the way, so if you’re sitting on them in shame at home, now would be the time to sell them to some other lonely soul. As for Bubble Bath Babes, some enterprising young minstrel should really take the puzzle within the excuse for nudity, fine tune it, lose the bathers, and put it out on Xbox Live. You can call it Tetryo Pop. You’re welcome.

F (for attempt at arousal within game)