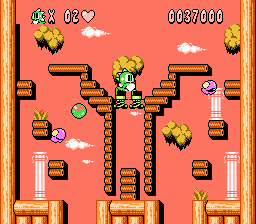 Yup, that just about sums it up. 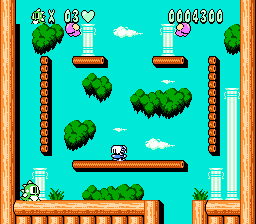 The story of Bub and Bob actually takes place in ancient Greece.

If you pick up a sequel to a game like Bubble Bobble, you’re not looking for ingenious new game design with mind-bending levels and skull-crushing enemies. You want to blow some cutesy enemies into bubbles and pop them, hopefully with a friend. Yes, taking a friend along for the ride was Bubble Bobble‘s saving grace, but put that out of your mind here. The only two-player mode in Part 2 is alternating, which means, you have to wait for one person to die before you can play. Repeat: there is no co-op mode in Bubble Bobble Part 2. So without the previous game’s best feature, what’s left? The unfortunate and confounding loss of the password function, and the addition of bosses and mid-bosses every few levels. The bosses seem like a nice touch, until you realize there’s no technique or strategy in destroying them; blow an insane amount of bubbles at their weak points and they die. At least the game looks more fun, bright, and colorful than the first, and Bub and Bob are a lot easier to control. That being said, the Bubble Bobble games were not meant to be played with just one person. They’re tedious and repetitive and the only real joy one gets from playing them is to see how quickly you can beat the level.