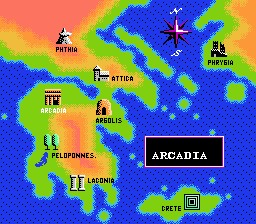 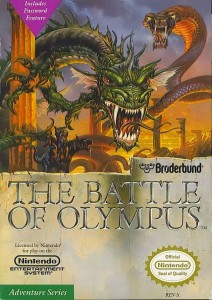 How I wish this cover truly represented the game within. 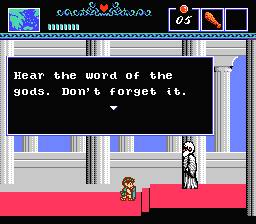 Those who aren’t comfortable with their protagonist bowing down to gods probably shouldn’t embark on this battle.

Perhaps I’ve gotten too used to contemporary games, where the developers essentially hold your hand as you progress, but I really hate older NES games that force you to find your way around. My idea of fun is not randomly wandering around an area, asking people what to do, while they spout out random bits of information that may or may not be helpful to you at your present state. Castlevania II and Zelda II are probably the most well-known examples of this, and true to form, gamers either love those entries or despise them. Battle of Olympus is essentially Zelda II, minus some RPG elements and an overworld map. Basically, this means B of O (heh heh) is not my friend.

The plot is traditional Greek fare: you play as Orpheus (although you can custom name your character) and you’re fighting to save your dead love, Helene, from Hades, the god of the underworld. You must find every god, starting with Zeus, and collect weapons, shields, and all manner of equipment from them to help you on your journey. Along the way, you fight famous Greek monsters like minotaurs and sirens and, yes, even Cerberi. It’s not an uninteresting plot, and had the game been developed as a straightforward action game with stages, I think the plot would actually be enhanced and the game itself more gripping.

You essentially navigate from screen to screen, fighting enemies and trying to find the gods. That’s it. The enemies can be challenging here and there, but they’re mostly annoying because they come at you over and over. To beat certain enemies, you might have to have equipment that you don’t have yet, increasing the frustration factor. An example would be Athena’s shield to fend off arrows. If you haven’t found her yet, the little goblin bear things that throw arrows at you are pretty invincible. The environments are also fairly bland. C’mon, this is Ancient Greece we’re talking about, and all you can give me for backgrounds are blue skies?! I know this is the NES, but it’s still inexcusable.

Two things really damper this game’s fun factor for me. One: the people in the game might tell you worthwhile information, but they’re all over the place. Helpful information obtained in Attica might not be useful until much later in the game. Perhaps in 1989, it would have been fun to write down what each person says, but people are a lot busier and able to play better games in 2011. Two: the game doesn’t feel like a hardcore adventure, like the story would suggest. It feels like a lackadaisical romp around Greece where you have all the time in the world. All the great action/adventure games of the NES make you feel like something dire is at hand, and only you can stop it; even Zelda II, my least favorite console Zelda game, forces you into action by showing you a sleeping Zelda at the beginning. It’s a shame such a ho-hum game comes equipped with some wonderful characters and plots from Greek mythology.

Graphics are sub-par, the music is boring, and about the only thing that prevents me from giving this game an F, is its playability. The character controls well, for the most part, and the game is technically beatable. With time and patience, Battle of Olympus can be won, but like all mediocre games, the question here is, why? If you like your adventure games brimming with frustration and guesswork, perhaps you too would like to make a trip down to Hades with Orpheus. No rush, though: he has time to spare.