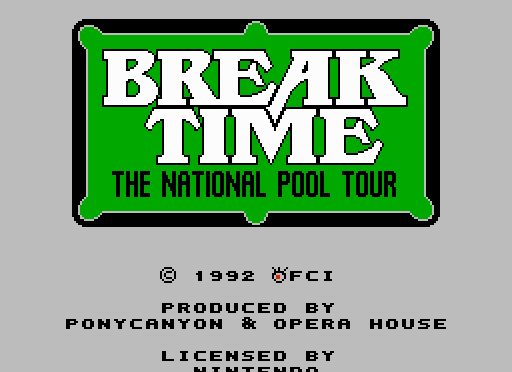 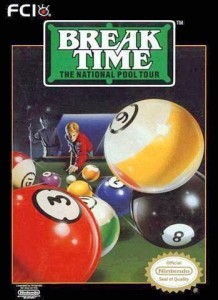 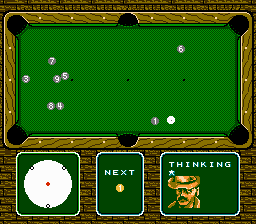 Keep thinking, Ed. Just think both of our lives away.

After a hard week’s worth of vampire killing, there’s no better way to unwind than with a couple games of virtual pool – at least that’s what Van Helsing tells me. He should have recommended Lunar Pool. I’m not sure what special type of downers the designers of this game were on when they programmed it, but wow: I’ve never played a slower, more frustrating game of anything ever; maybe an un-translated mahjong game from a bootlegged 42 ‘n 1 cartridge, but even that had its good times. I’ll write this, and I’m pretty sure I’ve written it before, but whatever: if you’re going to reproduce a “sport” or “game” in the virtual game realm – such as pool or baseball or fly fishing or whatever – make it resemble the actual game in every way, or just make it as cartoony and as goofy as possible; don’t try and do both. Break Time fails at life because it tries so hard to be a “serious” pool game, without attempting to fix the mechanics that prevent me from taking it seriously.

I’ll give Break Time this: if you’re really interested in pool, it gives you a lot of options. You’re able to choose from four different types of pool games: eight-ball, nine-ball, rotation, and 14-1 Rack Game (also known as “Straight Pool”). If you’re not a pool fan, or just don’t know the rules of the game and are curious, I will include this handy link for you if you really want to go that extra mile in learning. Otherwise, just know that all you have to do is sink the balls into the pockets, sometimes in different orders depending on the game. On top of the game options, Break Time also gives you the ability to play through a “National Pool Tour” – which runs through each of the different games listed above as you traverse the country – or simply practice to bone up on your “skillz.” For those who want to put a lot of time into their virtual pool game (probably about as productive as virtual bass fishing, but I’m not here to judge much), you may find a lot of rewards, but it will take a lot of slogging through mud to get there.

I hate mincing words: actually playing pool in this game is about as fun as drowning in a vat of hot soup, and not nearly as tasty (depending on the soup, of course). It takes forever to actually get through a full game of pool, no thanks to your opponent who’s always “thinking” about his next shot. Line up the cue, try and plunk the ball in, and let’s get going, man! This isn’t chess here, Ed the Cowboy (my preferred opponent, due to his beginner status). You as the player aren’t allowed to go very fast either. First, you place your cursor where you want to hit the ball, then you charge up your shot, and then finally, you hit the ball. If the balls are clustered together, you can kiss any hope for a decent shot goodbye. Even if you charge up your shot to the highest level, the balls will act like they’ve barely been hit. Only when the balls are separated from each other do you have a chance at actually sinking a shot. Such crappy physics pretty much destroy any chance of this game being fun.

Break Time? More like “Break the Break Time cartridge Time!” Perhaps more patient players than I can find some enjoyment to be had, but regardless, the poor ball physics… there’s just no excuse. For a developer to go the extra mile with options and then skimp on the actual game itself is slightly horrifying and mind-boggling. It’s the less astute gamers who suffer: they look at themselves, at Break Time, and wonder, “Perhaps I’m the one that’s the problem, not the game. Perhaps I just need to practice more in the ‘practice mode.'” Don’t believe the lies that FCI is trying to sell you. This game deserves to be sunk into the side pockets of hell for its crimes against the virtual pool community.