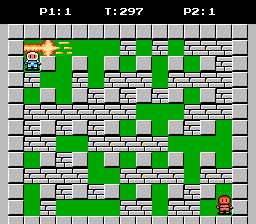 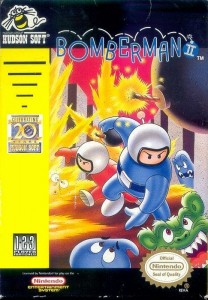 The cartoonish expression on the fire in the background cracks me up. 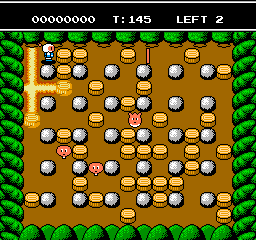 Bomberman goes after the logging industry, one tree at a time.

In light of the first game’s ending, where Bomberman turned into Lode Runner, it’s interesting that Hudson Soft decided to make a sequel to the original Bomberman. But hey, video game space/time continuums are meant to be broken, I guess. If they really wanted to make the whole thing work, they could say that a “Bomberman” is the pupal stage of what will eventually become a “Lode Runner,” thus the continuing adventures of “Bombermen” are really just children throwing bombs at one another! I don’t know. I’m trying to be clever, but I’ve been told that ‘clever’ is just a eunuch’s version of ‘funny.’ Let’s get on to the review, shall we?

Bomberman 2 is neither biggerer nor bolderer than the first game, but it does have a story and that’s gotta count for something right? One Bomberman – let’s call him Bad Bomber – robs a bank and sets up another Bomberman – let’s call him Stupid Bomber because he stands idly by and takes the blame. Of course, you play as Stupid Bomber and are hauled off to prison for your supposed crimes, while Bad Bomber gets away scot free, and goes scotting around in the Moors of Scotland. Your job as Stupid Bomber is to blast your way through eight levels of prison… then eight levels through the forest… then the mountains… and so on until you beat the game. The change of scenery does break up the monotony of the themed levels, but scenery can’t hide the fact that all you’re doing – still – is blowing up enemies and taking their prized power-ups.

But hey, I gave the first Bomberman an “A-” for being a simple run-and-bomber, with subtly addictive gameplay, so surely more of the same is good, right? Yes, more of the same would have been fantastic, but the little changes Hudson Soft added are weird and, strangely, make the game not as memorable. The enemies, while bizarre in the first game, were endearing, and there was a balanced mix between enemies that could float through blocks and those that couldn’t. In BM 2 (heheh), about 60-70% of the enemies can fly through blocks, which increases the maximum amount of needless deaths. It doesn’t help that the AI is a lot cheaper: sometimes you’ll be trapped between two blocks at the beginning of the level, and a couple enemies will fly through the blocks and kill you before you have time to escape. The enemy designs could use some tweaking too: what’s with the smiling baby blue dragons straight out of “The Land Before Time”? Also, it takes a lot longer to build up your bomb arsenal in this game. Many of the new power-ups – like invincibility from enemies or fire – are only good for the level, unlike BM 1 where every power-up helped you for good (save the timer, of course). Either that, or the power-ups don’t help you at all – thank God for that extra time that I didn’t need! Unlike the first game, there is a battle mode where you can duke it out with other Bombermen if you wish, but there’s something lacking in two or three-player Bomberman; namely, extra players. Also, no one actually owned an NES multitap, so I’m pretty sure if no one owns a peripheral, it doesn’t really exist.

This game marks the beginning of Bomberman’s cutesyness, which is fine for the Bombermen as a species (they’re children, remember), but strange for the rest of the game. Compared to the first one where you just jump in and play, no-hold-barred bombing action, the dumb unnecessary story, along with new silly monster designs and weaker gameplay really mar this second entry. If it weren’t for the efficiency of the overall game design – bomb every enemy, find the door/power up and move on – I’d rate the game a lot lower. As it is, it’s still Bomberman, albeit a eunuch version.

FUN FACT: Bomberman II came out in Feb. 1993, while Super Bomberman for the SNES came out in Sep. 1993. The latter was the first game to feature four-player support on the SNES, and it effectively changed the direction of the Bomberman series forever. Needless to say, not many people have played or remember Bomberman II. Were it a better game, that would be a travesty.