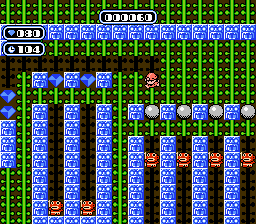 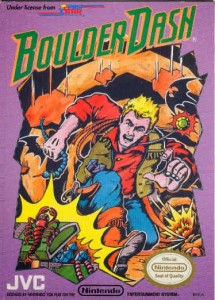 I hate to disappoint, but your character in the game looks nothing like this goofy Australian wannabe. 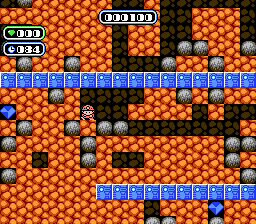 This is a screenshot of the first level – one of the few levels where mild pleasure can be found.

First of all, the title. Who doesn’t love a delicious pun? For those not in the know on their hip Forties slang , the term “balderdash” means nonsense. Old slang is so much more interesting than new slang, I feel. How would anyone ever come up with the term “balderdash”? I can pretty much say that any slang punk kids use today comes from crazy pronunciations of pre-existing words (“brah”) or abbreviations via txt (the ubiquitous “OMG”). Yes, “balderdash” is a gem of a word, but Boulder Dash is a rough lickspittle of a game. It tries to go for the cutesy puzzle feel a la Lolo, and instead stumbles upon its own ambitions, limited though they may be.

Boulder Dash threatens to be good, at least in the first couple levels. You play a driller, just drilling your way through miles of dirt and avoiding the boulders that threaten to fall on you from every which angle. Your main goal is to collect a certain amount of diamonds, and once you’ve reached that number, find the exit. It’s not exactly a puzzle game in the strictest sense, but you do have to be careful how you traverse through the dirt. The boulders have specific ways they will fall. Obviously, you shouldn’t go under a boulder, nor should you be to the side of a boulder as you break the dirt around it, because it will roll to the side and kill you. As I progressed, my heart wasn’t filled with whimsy, per say, but I’m pretty sure I felt something that slightly resembled amusement.

Then the fourth level happened and, try as I might, I could not get past it. Instead of collecting diamonds right from the get-go, you are obliged to kill butterflies that are trapped in these open squares surrounded by sand. Despite the fact that you have a drill and could easily annihilate the world’s butterflies with it, you kill them by precariously setting up the boulders so they fall through the sand and kill the butterflies, releasing spurts of diamonds from their crushed corpses. Sounds great, but the butterflies have lightning-fast reflexes and they’re not too pleased with your drilling ways. The second they’re released, they will kill you, and the boulders take their sweet time rolling down into the open square. You never have a chance. I never had a chance. I tried several times to take the evil level-conquering butterflies down, to no avail. I’ve decided the game’s broken, therefore we’re not friends.

It’s a shame, too. As I started the game, I thought I had a real sleeper hit on my hands. Collect the diamonds, avoid the boulders, the fifty or so levels get more complex as you progress, boom, instant B- rating. I move on to A Boy and His Blob, everyone’s happy (except for me because I’m pretty sure A Boy and His Blob is terrible). But no, they had to mess with the game’s already sloppy physics, with the boulders sliding onto insects. It doesn’t get better as you progress, either. Weirder enemies come into play, boulders are replaced by giant Easter Island heads, and the diamonds you collect are nowhere to be found, which means you probably have to kill aforementioned weirder enemies with said Easter Island heads. With the exception of the first three levels, Boulder Dash really is balderdash.