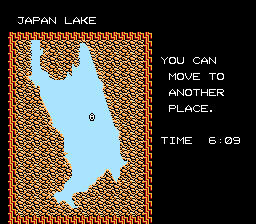 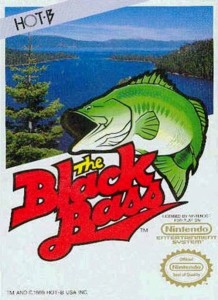 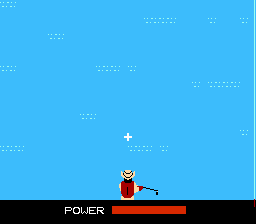 I’m not sure I’d use the word “Power” to describe anything about this game.

Fishing has never really been my forte’, but I do see its appeal: sitting out in the middle of a lake with a bunch of dudes, drinking beer, and just enjoying the day. The point isn’t so much about catching fish, but about enjoying the serenity and splendor that only a day spent in a boat with your buddies can provide…. Actually, as I’m explaining it, fishing sounds really, really lame. What an atrocious waste of time. Even if I did catch a fish, I wouldn’t want to eat it because I hate seafood. In short, fishing is wrong, which makes Black Bass a sin.

Alright, maybe fishing isn’t wrong, per say, but there’s absolutely nothing right with this game. It’s the epitome of virtual and real boredom, in that, nothing happens in the game, and consequently, the game makes you feel empty and lifeless in reality. It isn’t so much that the game is programmed poorly, either, because everything works as it should. You pick your spot on Lake Amanda (surely named for one of the game designer’s daughters), set up shop, and cast your line into the light blue water. And then you wait, and wait some more, and maybe, possibly, if you’re lucky, greater lengths of time will pass and still nothing will happen. Surely fish must show up at some point, and perhaps, they will even swim over to the bait that you’ve provided for them. They might not take it, though, and even if they do, you might lose the fish and have to start the waiting process all over again.

Couch anglers love these games. Believe it or not, fishing games used to quietly sell millions of copies throughout the 90s. There’s nothing to compare the fishing-game phenomenon to, either. All other niche genres possess some type of actual gameplay, like dating sims or Harvest Moon/Rune Factory or Koei feudal Chinese war sims. Black Bass‘ gameplay consists of changing out your bait, catching fish, and, as you catch more fish, moving on to bigger and better lakes. The goal is to get from 200th place in the Wranglers Tournament into first, but oh my, how long that would take you is anyone’s guess. One can’t say it lacks in replay value, but I don’t want to think of how many man-hours are wasted in games like these.

I can’t decide if I’m being too hard on Black Bass or the people that love fishing games. I suppose if you live in a concrete jungle, like Phoenix, and you need to get your fishing kicks from somewhere, consoles aren’t a bad place. Or you could go buy a live fish, throw it in a tub full of cold water, and bust out the ol’ bait and tackle accordingly. It might be sillier, but it gets the job done. Since fishing is less about catching fish and more about the experience of waiting around for hours on end, Black Bass will certainly fill that slimy large-mouthed bass gap inside your heart. The other 95% of the population can take a pass.