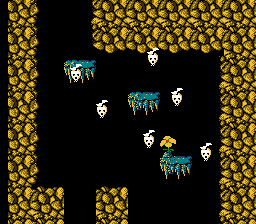 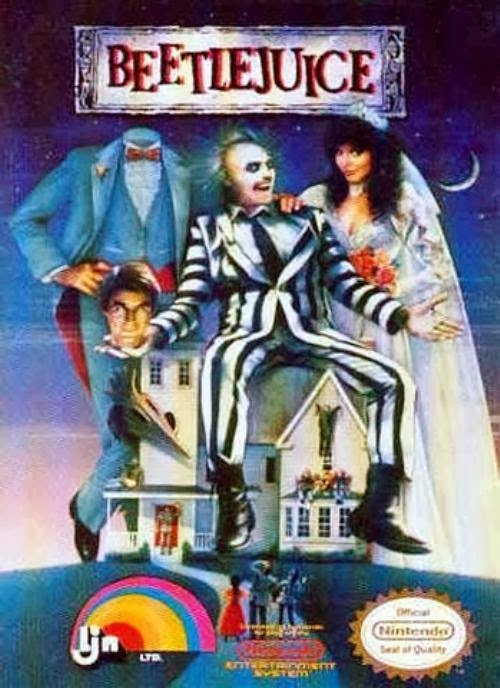 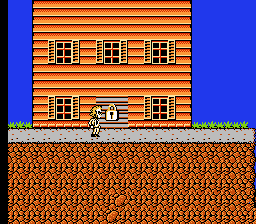 This is as far as sane people get.

It astounds me that LJN ever made enough money to purchase movie licenses so that they could produce crappy movie games time and time again. Who bought these monstrosities more than once?! Who didn’t learn their lesson after the first fifty or sixty dollars of lawnmower money was spent? I suppose with as little effort that went into their games, even if the games sold modestly, they would still make a fortune. The team probably consists of one demented designer who, by day, scribbles furiously on pages of dinosaur coloring books, then makes the game in a single night fueled by coffee and Del Taco. How else to describe the rage I feel deep within my bowels every time I see the letters LJN lurking in front of a cautiously optimistic rainbow?

I love the movie “Beetlejuice,” but it’s one of those beloved childhood classics that never needed to be made into a game. “Back to the Future?” Difficult, but I could see it. “Roger Rabbit”? A little avant-garde, perhaps, but if it was made into a good murder mystery a la Deja Vu, it might be worthwhile. Both are sacred movie cows of the Eighties and LJN, true to form, has desecrated them. As far as “Beetlejuice,” the potential game adaptation is concerned, nobody wants to play as the Maitlands, two well-meaning boring ghosts who are trying to scare the more-interesting yuppies, the Deets, out of their house. Everybody would want to play as Beetlejuice, but he’s hardly in the movie at all. Luckily, LJN doesn’t know what the plot of the movie is, and forges along with Beetlejuice as the main character anyway.

I’m not sure what the goal of the game is, nor am I sure if the last paragraph was one cohesive thought or a couple jumbled thoughts mixed together. But hey! It’s almost midnight and I feel like pumping out a couple of these reviews just because I can… we’re all friends here, right? Anyways, the game: Beetlejuice is running around outside in the day time attacking bugs. Just about anything can kill him, and if you get hit three times, you’re dead. The control is remarkably decent, but it doesn’t matter when you can’t figure out where to go. That’s the thing with LJN games: besides being astoundingly crap, they don’t know what genre they fit into. Is it an action game, an RPG, a puzzle, an insect-squashing sim, like Bee 52‘s older, maniacal cousin?!

I didn’t get very far in the game because the game told me it hated me with several meaningless deaths. I can’t handle those kinds of relationships, so I promptly turned the bastard off. It will rot in ROM hell, as far as I am concerned. May this be a warning to you and those you love: do NOT do LJN or its one-eyed, soulless developer any justice by downloading this or, God forbid, using actual cash dollars to purchase it at a used game store. Play it once, play it twice, play it three times, Beetlejuice will come out of the screen and force you to beat the game a la Clockwork Orange. You have been warned.